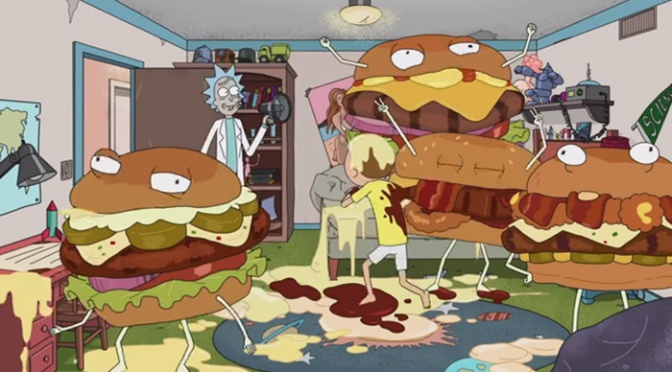 Be still my still broken heart; Rick and Morty have reappeared in my life with this RICKdiculous Carl’s Jr/Hardee’s commercial.

It is a tad disappointing that this is not a commercial for season three, and that this doesn’t actually make season three come any faster, BUT something is better than nothing when it comes to Rick and Morty.

Adult swim is a master at knowing who their audience is and Carl’s Jr/Hardee’s made a good investment making this commercial with Adult Swim’s best show.

This short 30 second commercial is chock full of classic Rick and Morty humor. Rick breaks the fourth wall, Morty complains, Rick doesn’t give a sh*t, and these gross alive hamburgers steal all of Morty’s stuff (NOOOOO NOT THE PLUMBUS!!!) and get sauce all over Morty’s bed. Also of note Morty’s A+ poster choices and the absolutely unnecessary fact that the burgers are talking(?)

So when I say Rick and Morty sold out, I don’t actually mean it. It’s not like they ever really could. This is more of a Rick and Morty commercial than a Carl’s Jr/Hardee’s one and when that burger landed with the white background at the end, I didn’t want a burger, I wanted more Rick and Morty.

No word yet on when season 3 is going to show up, but the show even makes fun of the fact that it takes way too long. Hopefully it’ll be less than a year and a half, but I guess we’ll just have to wait and see. In the meantime I guess you can go get yourself a Carl’s Jr/Hardee’s burger and cry about how you are missing Rick and Morty all over again.

Bonus RaM – If you missed it, Rick and Morty showed up a while back on The Simpsons, and it was about as good as a couch gag gets, complete with Futurama reference!

Let us know how much you love Rick Sanchez and his constantly upset grandson here in the comments or hit us up on Twitter or Facebook.