This February will mark the premiere of Hulu’s first big original drama 11.22.63, and they have released the first trailer. With its Back To The Future vibe (sans the comedy and whimsy), this Stephen King/J.J. Abrams co-production is an odd choice for the small screen, but one the entire production team feels confident about.

We were given a small tease in the form of production stills via J.J. Abrams’ company Bad Robot, but we now have our first trailer.

James Franco leads the new Hulu series 11.22.63, an adaptation of Stephen King’s novel of the same name about a high school history teacher who is sent back in time to prevent the assassination of John F. Kennedy.

The cast also includes Josh Duhamel (Transformers), Cherry Jones (24), and Chris Cooper (Bourne Identity, American Beauty), all under the direction of Kevin Macdonald (The Last King of Scotland, State of Play) and executive producing the first two hours of the eight-part series.

J.J. Abrams recently expressed why the streaming service was the best home for the Stephen King adaptation:

“They’ve been remarkable and incredibly collaborative, and as excited about this as we were…This is a book that I had loved long before Stephen King reached out and asked if I’d be interested in getting involved to produce. We did go out to a number of places and had some offers, but the enthusiasm [at Hulu] was clear and it matched ours.”

The series filmed mainly in Toronto, but spent a short time in Dallas recreating scenes for that fateful day in November of 1963. The production got incredible access to all the key sites, including the Texas School Book Depository, and Dealey Plaza.

The blunt of the production fell on executive producer Bridget Carpenter (Friday Night Lights), commented on the biggest change that was needed to expand the book into a full on mini-series was fleshing out a character (played by Daniel Webber) into a companion for Franco’s main protagonist. Additionally, they expanded other minor characters’ roles so the series could do without a voice-over.

Hulu Original series 11.22.63 is a thriller in which high school English teacher Jake Epping (James Franco) travels back in time to prevent the assassination of President John F. Kennedy — 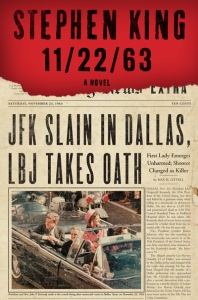 but his mission is threatened by Lee Harvey Oswald, falling in love and the past itself, which doesn’t want to be changed. Also starring Chris Cooper, Josh Duhamel, T.R. Knight, Cherry Jones, Sarah Gadon, Lucy Fry, George MacKay and Daniel Webber.