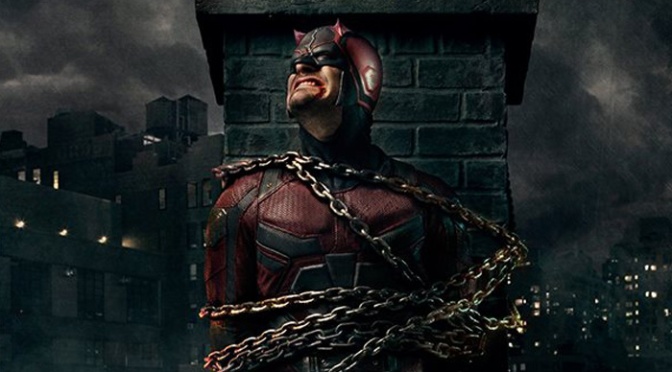 You know, you’re one bad day away from being me.

After a stellar freshman effort, the Devil of Hell’s Kitchen is set to return to NetFlix, this time with Elektra and the Punisher in tow. Now less than a month away, Matt Murdock and company will again star in a marathon of NetFlix binge-bait. And while promotional stuff was slow to appear the last few months, it’s now coming out at a remarkable rate. Posters and trailers and the promise of satisfaction for those who doubted that show runners could duplicate the quality of the first season.

The first trailer focuses on Frank Castle and his mission to clean up the city. He and Murdock have similar goal, but very different methods.

Here we see Karen ponder Castle’s motivation, and if the Daredevil must shoulder some of the blame for his creation. And we thought with Wilson Fisk in prison that Daredevil could just sit back and relax for a while. But with the appearance of the Punisher, that clearly won’t be the case. With this newest trailer (released this morning), the focus shifts from Frank to Elektra…

This spot shows us more Elektra and confirms the return of Stick. It also provides us another villain opposite the Punisher. Enter the Hand. Marvel Comic’s preeminent evil mystical ninja organization. Having first appeared in 1981’s Daredevil #174 (by Frank Miller), they have been torturing not only Daredevil, but have been scourge on the entire Marvel Universe at times. They have played a large role in the stories of Wolverine, Psylocke, Spider-Man, and Frank Castle. Their appearance isn’t a surprise, but a welcome addition to the MCU.

One thing that is interesting from the first trailer to the next is Rosario Dawson’s character Claire Temple. In the first trailer we see Foggy doing his usual “Stop being the Devil” shtick, with Claire telling him “This city needs him”, presumably in reference to Matt.  But in the second trailer, when Matt says “This city needs me” she replies with “This isn’t your city anymore.” Likely because it’s been overrun by the Yakuza or the Punisher. Or those could be out-of-order, who knows. Either way, we’re glad to see Dawson back.

Here are some of the moving posters they released, shining some more light on fan favorites Foggy Nelson and Karen Page.

Come March 18th, I’ll be binge watching – will you?