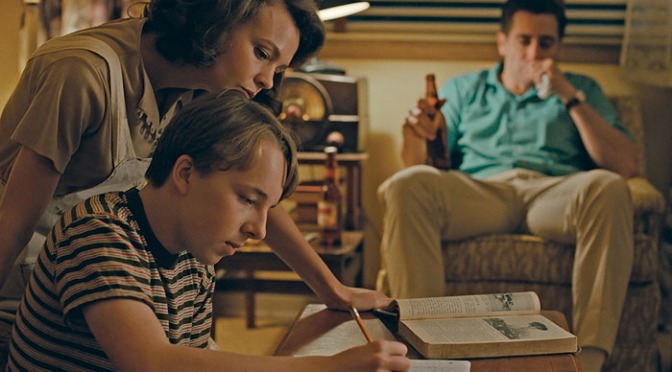 IFC Films released the first teaser trailer for Wildlife, the directorial debut of Paul Dano (There Will Be Blood, Little Miss Sunshine), co-written along with Zoe Kazan (The Big Sick), and based on the Richard Ford’s novel of the same name. The film stars Carey Mulligan (Inside Llewyn Davis, An Education) and a very trailer busy Jake Gyllenhaal who we also got a look at in the first trailer for The Sisters Brothers.

Check out the first teaser trailer for Wildlife below:

Mulligan delivers one of her finest performances to date as Jeanette, a complex woman whose self-determination and self-involvement disrupts the values and expectations of a 1960s nuclear family. Fourteen-year-old Joe, played by newcomer Ed Oxenbould, is the only child of Jeanette (Mulligan) and Jerry (Jake Gyllenhaal) — a housewife and a golf pro — in a small town in 1960s Montana. Nearby, an uncontrolled forest fire rages close to the Canadian border, and when Jerry loses his job — and his sense of purpose — he decides to join the cause of fighting the fire, leaving his wife and son to fend for themselves. Suddenly forced into the role of an adult, Joe witnesses his mother’s struggle as she tries to keep her head above water.

The debut trailer really puts Mulligan’s powerhouse performance front and center. There is already some serious Oscar buzz for the actress which started almost immediately after the movie first screened at Sundance. It has since screened in other film festivals including being the opening film of Cannes Critics Week where Charles Tesson, the sidebar’s artistic director, described Wildlife as a “director-driven film in the vein of Jeff Nichols’ films.”

“I wanted to make a film for a long time,” Dano had told the Sundance audience gathered for his festival screening. “I was really moved by [Ford’s book], and I think something that he captured that I loved was the feeling that family is one of the greatest loves of our life. And because of that, it’s also one of the greatest sources of struggle and possibly pain in our life, and it’s because of love that we experience that pain. And so the compassion towards these sort of flawed parents, and witnessing that through the kid’s eyes, spoke to me.”

Wildlife will be released in theaters on October 19, 2018.