Warner Bros and New Line Cinema have finally released the first trailer for the highly anticipated It: Chapter 2. Andy Muschietti is returning to direct from a script penned by It co-writer Gary Dauberman and based on Stephen King’s iconic 1986 novel.

Picking up 27 years after the events of the first film, The Loser’s Club returns to Derry after Pennywise re-emerges. Grown up, and played by an eclectic cast which includes James McAvoy as Bill Denbrough, Bill Hader as Richie Tozier, Jessica Chastain as Beverly Marsh, Isaiah Mustafa as Mike, Jay Ryan as Ben, James Ransone as Eddie, and Andy Bean as Stanley. Bill Skarsgård also returns as the terrifying Pennywise.

Check out the first official trailer for It: Chapter 2 below:

As much as this is our first look at much of the adult cast in action, many fans are probably most curious to see Skarsgård back as Pennywise. In an interview with EW, Skarsgård laments that Pennywise is back even angrier and more savage than before. “He’s been doing this forever really, so he doesn’t change in the sense that you would look differently. He looks however he wants to look for any particular prey at the time, but I do think there’s a change,” the actor says, continuing. “He’s inflicted fear on his prey, and he’s very focused on fear, but he’s never experienced it himself…Now he’s experienced something that he has been inflicting on others and … there’s a shift leading into the second movie.”

This is the first public footage shown of the film. Back in March, CinemaCon attendees were shown footage of Beverly (now played by Chastain) returning to her family home years later, where she learns that her father has since passed away. The new owner of the house is an elderly woman named Mrs. Kersh. Long-time fans will almost certainly remember this part from the book (as well as the 1990 miniseries). Invited in for tea, Beverly feels increasingly uneasy as she sees old family photos that are beginning to resemble Pennywise. Mrs. Kersh creepily grins when she reminds Beverly that “you know what they say about Derry — no one who dies here ever really dies.” We got to see a great section of this scene in the first teaser.

We’ll most certainly be getting a second trailer before the film’s September release date. This May 9 trailer drop is nearly two months later than the first chapter’s trailer drop back in 2017. Director Andy Muschietti confirmed on November 1, 2018, that filming had been completed, but has been deep in post-production, not wanting to reveal too much about the new, more star-studded cast.

You can also check out the It: Chapter 2 poster below: 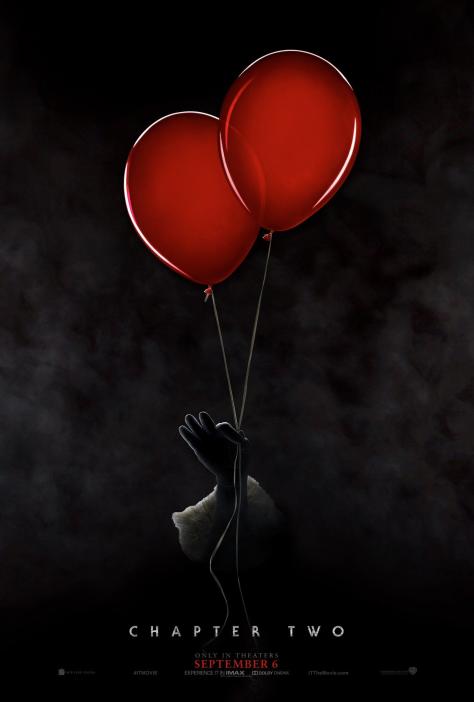 It: Chapter 2 is set to hit theaters on September 6.