Netflix has revealed the full-length trailer and incredible poster for David Fincher’s new film Mank, arriving in theaters and on Netflix later this fall. The 1930s Hollywood era re-evaluated through the eyes of scathing social critic and alcoholic screenwriter Herman J. Mankiewicz as he races to finish the screenplay of Citizen Kane for Orson Welles.

Check out the full trailer for Mank below:

Mankiewicz is most famous for co-writing Citizen Kane alongside director Orson Welles. Although the film caused a rift between him and Welles, as Mankiewicz accused the director of pushing him out of the limelight, even offering to pay him off so Welles could get the sole writing credit on the film. Widely considered to be one of the greatest films of all time, it gave Mankiewicz quite the influence in the golden age of Hollywood and in doing so Fincher and his team have filmed Mank entirely in black and white to emulate that era’s visual facade before digging in much deeper (and likely darker) than would have been allowed during the studio era of the 1930s.

Mank looks like a big departure from Fincher’s usual style, with the director making a movie set in a time period far removed from any of his previous movies and working with cinematographer Erik Messerschmidt to create a movie which looks like it could have been made 90 years ago, but also feels like an exciting creative leap for the director. Mank has been a long-gestating passion project for Fincher, with a script by the Oscar-nominated director’s late father Jack Fincher. Its release comes a little over 79 years since Citizen Kane’s original wide theatrical release.

While you’re here check out what has to be one of the best posters of the year: 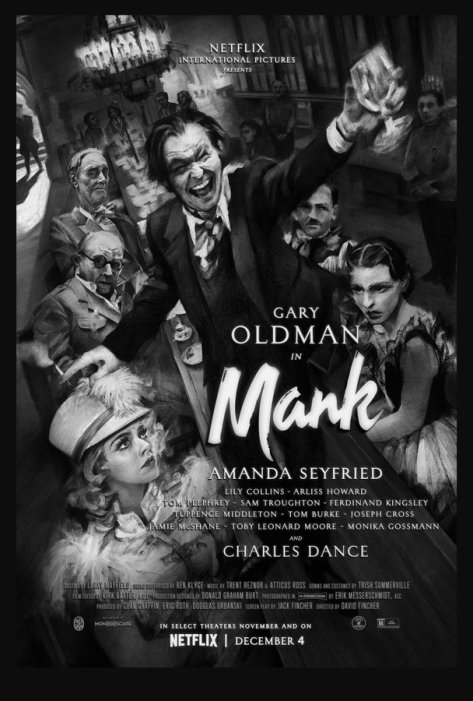 Mank marks Fincher’s first directorial feature since 2014’s Gone Girl and will hit select theaters throughout November before its streaming debut on Netflix on December 4th, ahead of a likely Oscar push.