Netflix has revealed the full-length trailer and incredible poster for David Fincher’s new film Mank, arriving in theaters and on Netflix later this fall. The 1930s Hollywood era re-evaluated through the eyes of scathing social critic and alcoholic screenwriter Herman J. Mankiewicz as he races to finish the screenplay of Citizen Kane for Orson Welles.

Check out the full trailer for Mank below:

END_OF_DOCUMENT_TOKEN_TO_BE_REPLACED 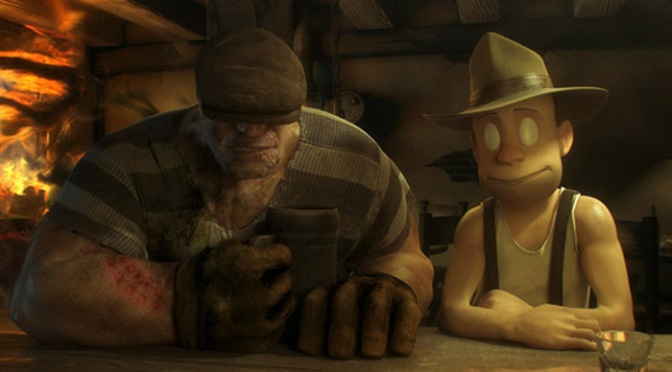 Back before Tim Miller was directing his record-breaking smash hit Deadpool, he was one of the guiding forces behind developing the animated adaptation of Eric Powell’s comic series The Goon.

David Fincher signed on to produce the film in 2008 , working off a script from Powell himself, and recruited Miller to co-direct the project along with Jeff Fowler. The effort eventually culminated with a trailer length release of some test footage in 2012, not unlike the video that gained a large enough viral following to get Deadpool off the ground. However, unlike what happened with Deadpool, that was the last anyone heard about the project.

END_OF_DOCUMENT_TOKEN_TO_BE_REPLACED

Ever watch a movie and see the name Alan Smithee pop-up as the director, or maybe the writer in the credits? Wonder how this one person could possibly write and/or direct so many varied films, and they all…well, happen to not be very good? You may find my questions coy as most of you already know that Alan Smithee is an alias usually regulated to a filmmaker who wishes to have their name removed from a project. This name-change is usually the result of a long, strenuous battle between filmmaker and studio, or when cuts and edits are made to a director’s film against their wishes. Whatever the case, here at Grizzly Bomb it got our gears moving on a new list, this one focusing on the many films in which a director disowned their own film, sometimes using the Smithee alias, storming off set, or staying silent about the film altogether. Some even had the clout (either at the time or later on) to lock the film up away from the public altogether.

END_OF_DOCUMENT_TOKEN_TO_BE_REPLACED 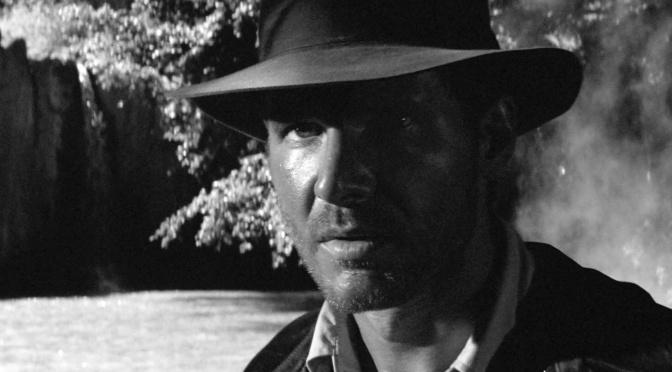 To show the importance of staging in filmmaking, director Steven Soderbergh reworks Steven Spielberg’s classic adventure Raiders of the Lost Ark into a moodily, affective black and white silent film. The film is essentially stripped of many surface elements to highlight the deeper ones (at least for Soderbergh). No more color or witty banter from Harrison Ford, and we lose John Williams iconic score. Soderbergh replaces all of the soundtrack with Trent Reznor and Atticus Ross’ score from The Social Network, not to draw comparisons between the two films but rather to provide audible accents to the staging.

END_OF_DOCUMENT_TOKEN_TO_BE_REPLACED 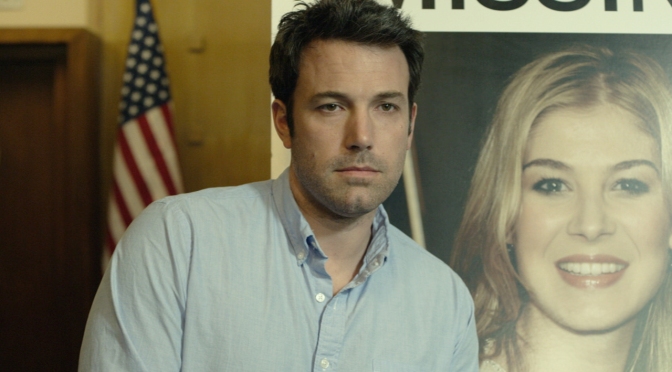 David Fincher can do anything he wants in my opinion. If he wants to do Star Wars, let him do Star Wars. If he wants to tackle a full season of HBO television like True Detective, by all means do it. Fincher has this beautiful, yet blunt ability to dig deeper into a story and draw out every wonderful or excruciating detail and throw a spotlight on it. Okay, maybe more excruciating than anything, but his ability to present several angles fleshes out all this stories and makes them memorable at the very least. Gone Girl is no exception. This movie resonated with me for hours after I left the theater. This dark portrait on a marriage, first impressions and snap judgements in a media dominated society enthralled me for the two hours plus in the theater. While it may not ever hit that final gear in gripping the audience, you will walk out of the theater eager to discuss with your fellow moviegoers.

END_OF_DOCUMENT_TOKEN_TO_BE_REPLACED

Eric Powell, creator of comic book property The Goon, took to the Internet to answer questions via Reddit’s AMA (ask me anything) subreddit. While his intro and answers were mostly in relation to the in-progress Goon Movie Kickstarter, he was candid and forthcoming about plenty of his other work as well.

END_OF_DOCUMENT_TOKEN_TO_BE_REPLACED

For fans of the Halo universe, these past few weeks have been nothing less than a conglomeration of anticipation and teasing. The Forward Unto Dawn series released its first full-length episode instead of the short vignettes we’d received before, and NewEgg.com ran an incredible sale of $15 off the pre-order (if you missed out, sucks to be you).

Now the live-action trailer for Halo 4 is out, and like the previous live-action trailers before, it does not fail to grip the viewer with its intensity even in such a short amount of time.  The trailer, entitled “Scanned,” features a captured Master Chief being tortured in some way by the new enemy gamers will face in Halo 4:

The trailer was produced by David Fincher, that guy who made those awesome films like Fight Club, Se7en, and The Girl With the Dragon Tattoo.  Tim Miller directed the trailer, pairing with Fincher as he had previously worked on special effects for Fincher’s Tattoo.  The two delivered Halo fans an impressive piece of artistry here that again only makes us more anxious for the game’s release.

Though we love these live-action trailers, the question amongst gamers still remains; will this new “ancient enemy” be a worthy foe like the Covenant have been for the past 10 years, or will they just be something to roll our eyes at?  The enemy leader in this trailer appears to be quite threatening (anyone who can capture Master Chief definitely shouldn’t be underrated).  Hopefully, the game creators have integrated the race deftly into the timeline, canon, and framework of preceding Halo lore.

We’ll find out how everything is presented in only two weeks.  If you haven’t already, make sure to ask off work for November 6, when the regular and limited editions of Halo 4 will be released so you can game the day away.

In David Fincher’s adaptation of The Girl with the Dragon Tattoo, he takes what was a melodramatic and overall poorly made 2009 adaptation, and adds a new level of ferocity and stylishness to it that was otherwise lost on the original. I think this is due mostly to his familiarity with the source material, a novel of the same name by the late Stieg Larsson, and his unfamiliarity with the original Swedish film (he’s been quoted as saying that he’s never seen it).

By now the plot should be familiar to most, but I’ll run through it to give everyone a fighting chance. The story follows a journalist named Mikael Blomkvist (Daniel Craig) who’s been exiled by almost every news outlet and has been stripped of his credibility due to a story that he published that was “proven” false. On the other side of things, professional computer hacker Lisbeth Salander (Rooney Mara) has gathered information on Blomkvist for a large Swedish family that is interested in hiring him for a job.

The job is to investigate the murder of Harriet Vanger (Moa Garpendal), the 16-year old niece of Henrik Vanger (Christopher Plummer), who is the head of a large corporation known as the Vanger Co. For the past forty years, Vanger has been investigating Harriet’s death with no luck at all. In his desperation, he hires Blomkvist, in the hopes that he might be able to crack the case. Blomkvist reluctantly agrees, but the only way that he can do it is to hire the same person who was hired to investigate him, Lisbeth. The two team up to solve the murder of what might have been the heir to the entire Vanger legacy.

David Fincher’s interpretation of The Girl with the Dragon Tattoo is much better than the 2009 original, but in some respects it isn’t good enough. As a huge fan of the source material, the only way that this film could possibly live up to my expectations is by being four hours long, because that’s how long it would take to include everything that a film of this magnitude requires. But, from a strictly cinematic standpoint, The Girl with the Dragon Tattoo is an extremely fascinating murder mystery.

At 158 minutes, the film is a lot to take in, but it’s unfortunate because the first 80 minutes require Lisbeth and Mikael to be apart until they finally meet to work together on the case, which is far too long in my opinion. I say that because they only spend about 45 minutes solving the mystery together, with the last 35 minutes being dedicated to the aftermath of the ordeal as well as Salander proving Blomkvist innocent.

Though the build-up seems unnecessarily long, once the two finally get working, the film ignites. Their chemistry is sheer beauty. Who knew that mixing such an “alternative” personality as that of Lisbeth Salander with straight man Mikael Blomkvist would create pure magic? It doesn’t hurt that the performances by both Daniel Craig and Rooney Mara, especially the latter, are undeniably committed and mesmerizing. Similar to that of Justin Timberlake in The Social Network, I almost forgot that I was staring at two actors and not viewing the private exploits of such fascinating personalities. Lisbeth Salander is portrayed as much more personable and approachable to Blomkvist, turning their relationship from strictly physical and professional, to borderline romantic, an addition to her character that I’m actually glad they made.

David Fincher’s direction is undoubtedly stylish, but in comparison to The Social Network, which was steadily chaotic, The Girl with the Dragon Tattoo is chaotically steady. By this I mean that regardless of the amount of pulsating action that happens on the screen, the camera refuses to take the shaky cam route and is one of the few things in this movie that remains calm, which I’m thankful for. In keeping with the almost classy and dark style that the film seems to go for, remaining steady really helps set a tone rather than flopping all over the place, blurring everything out of view.

Trent Reznor of Nine Inch Nails and Atticus Ross, who also did the music for The Social Network, again compose the soundtrack. Whereas the music in The Social Network seemed to be a crucial part of the look of the film, the music in this film serves more as background filler rather than a key aspect, sans a dazzling credit sequence set to a cover of Led Zeppelin’s “Immigrant Song”.

Overall, as a remake, and even as an adaption, The Girl with the Dragon Tattoo succeeds, but its sometimes obvious representation of the killer, as well as the dangerously slow first half drags the film down from great to good, which I’m perfectly fine with. I didn’t expect another Social Network, and I definitely didn’t get one. I’ve never been a huge fan of the adaptations of the books, because there’s just too much to adapt into one film, regardless of its length, but Fincher makes it much more watchable than the 2009 Swedish version, and that in itself is quite the achievement.

Welcome back to the Hero Express, your one-stop sometimes SPOILER filled shop through the news filled world of superhero’s in Film and TV.