Warner Bros. Animation returns to the world of Mortal Kombat with the follow-up to Scorpion’s Revenge with a new animated film slated for home video release later this summer.

In Mortal Kombat Legends: Battle of the Realms we pick up right after the events of Scorpion’s Revenge where our heroes are attacked by Shao Kahn. Raiden and his group of warriors are now forced into a deal to compete in a final Mortal Kombat that will determine the fate of the realms where they must travel to Outworld to defend Earthrealm. Meanwhile, Scorpion journeys to find the Kamidogu (a mystic relic made by the almighty Elder Gods) before it is used to bring back the mysterious One Being, who would destroy the universe.

Check out the new trailer to Battle of the Realms below:

Both Joel McHale and Jennifer Carpenter are returning to voice star in Mortal Kombat Legends: Battle of the Realms as Johnny Cage and Sonya Blade. The rest of the vocal talent consists of Jordan Rodrigues as Liu Kang, Patrick Seitz as Scorpion & Hanzo Hasashi, Artt Butler as Shang Tsung & Cyrax, Robin Atkin Downes as Shinnok & Reiko, Dave B. Mitchell as Raiden, Kintaro & Sektor; Ikè Amadi as Jax Briggs & One Being; Grey Griffin as Kitana, Satoshi Hasashi & Mileena; and Fred Tatasciore as Shao Kahn.

The first film, Scorpion’s Revenge, marked the first Mortal Kombat based property to be produced at Warner Bros. Animation after its parent company acquired the franchise in 2009 from Midway Games. It was also the first Mortal Kombat animated project since the 1996 animated series Mortal Kombat: Defenders of the Realm, featuring co-creator Ed Boon involved as a creative consultant, and before the release of the live-action Mortal Kombat from producer James Wan earlier this April, the first MK film to receive an R-rating. 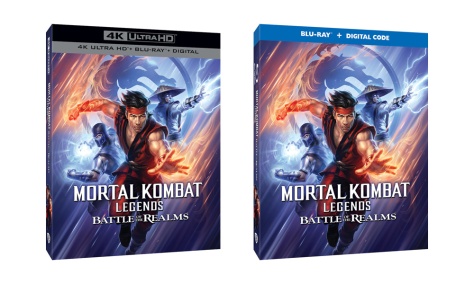 Mortal Kombat Legends: Battle of the Realms will be released on Digital, Blu-ray, and 4K Ultra HD Combo Pack on August 31.