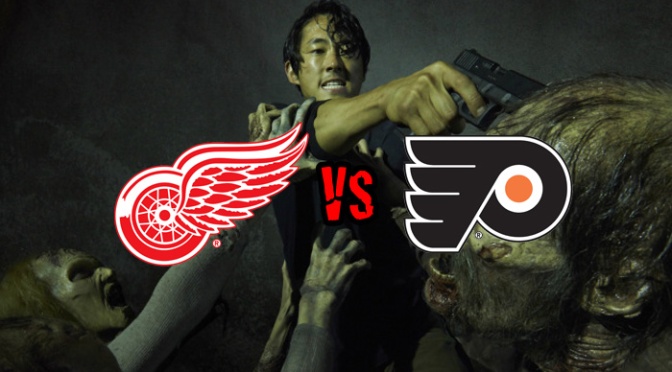 We don’t touch on sports as much as I might like around here, but that’s cause things are already lacking any sort of laser focus. But this story gives us a fun crossover that involves The Walking Dead‘s Steven Yeun, and the NHL’s Philadelphia Flyers…

END_OF_DOCUMENT_TOKEN_TO_BE_REPLACED

Just for the record: In my first round playoff preview I only predicted half of the games correctly and got one series exactly correct (Phoenix in 6). There also will be no repeat of last year’s Stanley cup Finals as both Vancouver and Boston were eliminated.

By taking care of business versus Chicago the Coyotes advance into the second round of the playoffs for the first time in 25 years and the first time since moving to the desert. The first five games of their series against the Black Hawks went into overtime, an NHL first, and youngster Mikkel Boedeker got back-to-back game winning goals. With Hanzl and Vrbata battling some injuries and Shane Doan skating his way out of quality scoring chances they had to rely on the likes of newcomer Antoine Vermette to put the puck in the net. What most people will remember from this series however is the head shot Raffi Torres laid on Marion Hossa that garnered him a hefty 25-game suspension. Nashville, on the other hand, took out Phoenix’s greatest playoff kryptonite in the Red Wings. Detroit just didn’t have that killer instinct this year and Nashville was able to grind away a series victory bolstered by the strong play in net by Pekka Rinne. Rinne and Phoenix’s Mike Smith were both brilliant in the first round posting identical 1.81 GAA albeit with Smith appearing in an extra game. This should be a really good grind it out series that probably no one will watch. Phoenix and Nashville aren’t exactly hockey hubs and certainly won’t attract the casual fan. With goaltending being even I give Phoenix the slight edge in offense and nastiness.

Prediction: Phoenix in 7 with at least four overtimes.

END_OF_DOCUMENT_TOKEN_TO_BE_REPLACED

There’s no reason the Rangers shouldn’t win this series, unless they have a major injury to someone who happens to reside between the iron during the games. While Lundqvist has been a little dinged up lately and Ottawa won the regular season series 3-1 including  shootout victory, I still don’t see it happening. The Rangers aren’t going to blow you away with scoring, although Gaborik and Richards have been solid scoring threats all year, they are dominate defensively and will grind away softer teams like the Senators. It has been a feel good year for 39-year-old Daniel Alfredsson, emerging superstar defenseman Erik Karlsson and some of the non-Swedes on the team but Ottawa lost it’s divisional battle with the Bruins and therefore have to face the mighty Rangers. If it wasn’t for John Tortorella behind the Rangers bench you might give the Sens a punchers chance in the series but there is no way that Torts lets his team look past Ottawa and he will have them focused as they need be.

END_OF_DOCUMENT_TOKEN_TO_BE_REPLACED

There are a lot of interesting stories and intrigues surrounding the 2012 NHL Winter Classic, but perhaps the most significant revelation is the winner of the 2013 Stanley Cup. Before we get to the stone cold prediction however lets first examine some of the interesting bylines of this years contest and a brief recap of the action.

After the success of last years 24/7, series HBO has again been filming behind the scenes footage of this year’s Winter Classic participants for the month leading up to the game.

In addition to competing with Quentin Tarantino, the Coen Brothers and Martin Scorsese for most F-bombs in a given minute, the series is also a fascinatingly entertaining look into NHL locker rooms, and the on and off ice lives of the players.

One of the “breakout stars” of the series is the enigmatically charming goaltender of the Philadelphia Flyers Ilya Bryzgalov who was at the center of a minor controversy this week as he was benched for the Winter Classic in favor of backup goaltender Sergei Bobrovsky. Apparently Flyers head Coach Peter Laviolette was trying to send a message to the star goaltender: “Focus less on the insignificance of you place in the Universe and focus more on the significance of a vulcanized rubber puck headed towards you face!”

END_OF_DOCUMENT_TOKEN_TO_BE_REPLACED

What the F is going on in Philly?!?!?5 goalie changes in 9 games?!? Really??? You might be able to convince me that the temporary goalie change after the game was 2-2 was justified by a “hurt wrist”, but I have it on good authority that Boucher actually had to go change his depends after crapping the bed and blowing a 2 goal lead……..allegedly…What? Prove me wrong sir!

That stat is just absolutely ridiculous.  I would try to come up with something positive to say for the Flyers after the first 2 games, but I’m coming up blank……Ummmm, “Good job on keeping game 2 close after suffering a game 1 blow-out?” OH! The offensive looked to have some life with 54 shots on goal in game game 2…even though only 2 went in the net.

As for Boston, Vezina finalist Tim Thomas is the star of the series so far.  The dude bounced back to be lights out after letting in 2 early goals in game 2, and finished with 52 saves. If Thomas continues playing at this level, and consistently receives the same support in front of him that he got in both games, then Boston representing the East in the Stanley Cup Finals is almost a sure thing.

With that said, I’m going to change my prediction:  Boston in 5.

Well since we all know the Eastern Conference is inferior to the Western Conference, lets not even bother talking about the race for second place. Instead, lets talk about something more important…

Let’s look at the East.

This series is a no-brainer. The Capitals showed they are firing on all cylinders when they dismantled the Rangers in the first round. The Caps were able to get significant production from from supporting cast members like Arnott and Knuble in addition to the multiple point put up by Ovechkin and Semin. To make matters worse for the Lightning Michal Neuvirth is coming into this round boasting a 1.38 GAA and 0.936 save percentage. One thing that does need to be said about the Lightning is what an amazing job Steve Yzerman has done. He has turned Tampa Bay around and crafted them into an EASTERN CONFERENCE playoff contender.

This will be the series to watch in the East for competitive, grind it out, physical hockey. Both teams are coming off of hard fought 1st rounds that went to game sevens, so hopefully that intensity carries over. With the goalie carousel going on in Philly and a banged up Pronger, I think Boston has the advantage going into this series. That being said, lets not forget Boston found a away to blow a 3 game lead and let the Canadians take them to the brink.