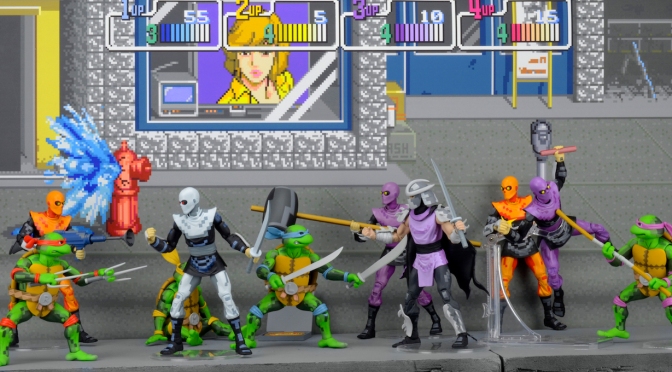 There have been numerous Teenage Mutant Ninja Turtles video games released, and depending on how old you are, you will have your own personal favorite. For me growing up in the 80s, I would always hit the arcades to play on one of the coolest games around, the Turtles arcade game.

END_OF_DOCUMENT_TOKEN_TO_BE_REPLACED

Get ready for June to turn green. Not only from the great weather and the accompanying plant bloom, but the greenbacks that’ll be exchanged at the box office as audiences flock to see more Teenage Mutant Ninja Turtles action. That’s right, the heroes in a half shell are back in the inevitable sequel to the 2014 hit. And their new foes can’t wait.

There’s no surprise there. Someone had to fill in the power vacuum after the turtles put the kibosh to Shredder in the first movie. And what an ensemble of lowlife scum! Long-time fans will immediately recognize the mutated boar Bebop and rhino Rocksteady in movie trailer below:

END_OF_DOCUMENT_TOKEN_TO_BE_REPLACED

I have to be honest with you.  I have a deep love for the Teenage Mutant Ninja Turtles.  I have one more admission.  It physically pained me when I found out some of the silly things that Michael Bay had in mind for the 2014 reboot.  Really, Sir?  Aliens?  Really?

The cast of the mutant, uh, I mean, “alien” brothers has been finalized so I can’t help but add my two cents about the gents.  Being attached to the name “Michael Bay” certainly has its advantages.  Bay abuses what I would call an “increasingly stupefied” audience.   Are his films visually overstimulating because that is his true expression of art, or is he just supplying what the audience wants?  Either way, I don’t know what his exact plans are for the Ninja Turtles reboot, but I can guarantee they will be stupid and I will hate them. He is, however, box office gold.

So will these budding young stars reap the benefits of Bay’s name?  So long as they don’t call him a Nazi, I’m quite positive they will experience some success from this highly commercialized, toy friendly franchise.

Cast as the group’s leader Leonardo is Pete Ploszek.  You may recognize him from Parks and Recreation that one time.  If you missed him then, maybe you saw him on Shameless that other one time.  He has the shortest resume of the bunch, but this could be the springboard he needs.

Alan Ritchson, who has some fairly memorable previous performances, will be Raphael.  Of all the main characters, this guy could potentially benefit the most from this stamp on his career.  Between the Ninja Turtles being filmed, and The Hunger Games in post production, his attachment to some major titles could lead to future success.  His strong handsome face doesn’t hurt anything either.  Too bad his gorgeous mug is going to be CGIed in Ninja Turtles.

Jeremy Howard has been cast as Donatello.  I am not entirely sure how he fits in considering the other gents are a bit more statuesque.  However, he does have the most experience in films dealing with aliens, so I suppose that is fitting with Bay’s ideas.  The only thing I can project is that they are truly trying to highlight the geekiness of Don’s character.  This is the exact opposite of what they have done previously.  Donnie was always the smart techie guy, but to avoid boxing him into a one-dimensional character, they also gave him a skateboard.  These are all just assumptions, but as I have stated earlier, I already hate this movie and it is stupid.

I found Noel Fisher (Shameless, Terriers, etc.) to be the most recognizable of the foursome.  He, obviously, will be playing Michelangelo.  “All the good ones end in ‘o’.”  Considering Mikey was my favorite turtle, I hope he stays true to the character.  I feel weird saying that considering he is a turtle that is a ninja that also likes to party.  What great depth!

Rounding out the cast is the ever sultry Megan Fox.  Considering there aren’t too many female roles to choose from, she will be  April O’Neil.  I was kind of crossing my fingers she would have been the Shredder.  Or even better, she could have been that girl turtle from that Saturday morning show that no one watched…

The only thing that I can guarantee is that I don’t care.  Keep an eye out for Ninja Turtles exploding in a theater near you next summer.

First of all, how dare you? Soon after Michael Bay’s name was attached to a Teenage Mutant Ninja Turtles reboot, he proved he was not to be trusted. The working title of the projected May 2014 film is Ninja Turtles. By omitting the Teenage and Mutant, Bay has opened up the floodgates to his outlandish, ill-received changes. Earlier this year, he revealed the turtles will no longer be mutants. Rather, they will be aliens. Though alien inhabitants became an integral part of the comic book series, making the turtles aliens will destroy one of the key factors that made them so special.

Recently reported on IGN, several released script ideas have only fueled the flames of fury among true TMNT fanatics. Though the turtles are no longer teens, April O’neil and Casey Jones are, except they are exs. What? Why? I am assuming that means April will no longer be the beloved news reporter that connected the turtles to the world they felt distanced from. I can only imagine how obnoxious Jones would be as a teenager. Jones as a teenager makes me think of some disrespectful, loitering punks I forgot to punch outside of a local convenience store.

With this script, Bay would be removing two key factors that made the turtles relatable to their younger audience. The turtles we grew up with were mutated teenagers dejected from the world. That sounds like every insecure adolescent I have ever come in to contact with. So how else can Bay manipulate our beloved story line until it is unrecognizable? Did I tell you that Master Splinter is completely missing from the draft? Of course he is. What significance did he ever have anyway, right?

Just to make sure that this is a Bay specific story, he made some other minor tweaks. Shredder will no longer be Shredder. That would be ridiculous to call the villain Shredder. Instead, he will be Colonel Shreadder. Not different enough for you? Okay. To make sure this is a Bay creation all of its own the Foot Clan will be replaced with a Special Forces unit under Colonel Shreadder. You just can’t trust the military, can you?

I can see the trend here. Bay has flooded his films with big boom box office bait, and now he wants to prove he is capable of making something more significant. May I preface this next rant by saying, “You will never be Christopher Nolan.” Now to put it into context. Batman shall remain one of the greatest American heroes ever created. Though the comic book creation and a stint of the 1960s were the epitome of camp, the character has an appealing dark theme that is not only relevant to adults and children alike, but society as a whole. Nolan has completed an amazing trilogy using one of the greatest heroes ever created. Teenage Mutant Ninja Turtles however, shall always be considered camp. I lovingly refer to it as camp, but it is nothing more than marketable camp. You cannot honestly tell me that Robert Van Winkle jiggling around on stage while the turtles destroy some Foot Clan is ground breaking cinema. Due to an oddball concept of four cartoon turtles with ninja weapons and a story that closely emulates the Daredevil franchise, Kevin Eastman and Peter Laird created gold that I will forever enjoy. So keep your filthy hands off!

These egregious additions to the script are only a draft. If we’re lucky, they’ll never see the light of day. Cowabunga, dude!

Welcome back to the Hero Express, your one-stop sometimes SPOILER filled shop through the top five stories in comic based Film & TV news!

END_OF_DOCUMENT_TOKEN_TO_BE_REPLACED

Michael Bay really does have a way to entice the masses in two separate ways. He has either pulled in several hundred millions of dollars and packed the theaters with his visual style, or he has enraged a fanboy base that asks for their childhood to not be destroyed in a sweeping camera move. As much of a giant douche bag that he is, the guy is a great visual artist and moviemaker that knows exactly how to draw people in and make them ‘Ooo’ and ‘Awe’ despite the fact he has no clue how to do a stationary camera shot. His next conquest/debate maker? The Teenage Mutant Ninja Turtles. Or actually, just Ninja Turtles. Because he’s changing the name. And the origin. And your childhood memory. Why can he do this? Because he’s the producer dammit and bathes in Victoria’s Secret model’s tears.

END_OF_DOCUMENT_TOKEN_TO_BE_REPLACED

This is Button Mashing, Grizzly Bomb’s video game news headquarters. Previews, interviews, rumors and all the latest stories relating to the biggest games, all in one place. Here are the most important things you need to know for the week of January 30th, 2012:

Rumors and hearsay has become cold, hard fact: “Xbox 720”, or at least its core ‘System on a Chip’, is already being developed. According to Fudzilla:

“Recent speculation that the new main System on a Chip (SoC) for the Next Xbox began production is apparently accurate; the SoC did indeed start production in late December of 2011. Sources tell us that the code name for the chip is Oban, and it is being produced by both IBM and Global Foundries for Microsoft.“

Fudzilla’s report continued with a lot of important (and partially incorrect) combinations of words and numbers which are certainly important and made no sense to someone as tech-stupid as myself:

“The power behind the next Xbox will be a PowerPC CPU that is married to an ATI Southern Islands GPU, or modified 7000 series…”

However, IGNcorrected the initial mistake with the following update:

“…mass production of the system’s GPU will indeed begin by the end of 2012 but will not, however, be based on AMD’s 7000 series Southern Islands GPU. Instead, the processor will be derived from the 6000 series, which was introduced last year. More specifically, it will be akin to the Radeon HD 6670, which offers support for DirectX11, multidisplay output, 3D and 1080p HD output.”

They went on to summarize it for the layman (Thank you IGN. Sincerely: The layman):