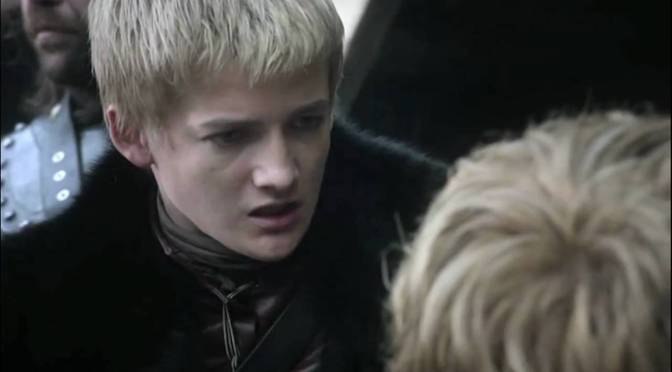 So we’ve had our fun with the last two seasons of the best kills on Game of Thrones. So let’s just get a bit more ridiculous and proceed with another list: The Game of Thrones Top Ten Slaps to the Face List! What’s that you say? Not enough slaps to make up a whole list? I beg to differ Ser! On with the list!

This one wasn’t so much Viserys calling his sister a horse lord slut after smacking her down, but rather what it incited in Daenaerys. This time when “the Dragon” decided to threaten the Khaleesi, she didn’t need Rhakaro and his whip to shut him down; she used a whip of her own. After Dany blasts him in the face with a gold belt she lays down one of the best lines in the series: “The next time you raise a hand to me, will be the last time you have hands!” You can check out that scene below:

Let’s face it, this guy is scum who doesn’t belong on the Kingsguard or even to be a knight. As Ser Jaime Lannister points out to him, nowhere in the White Book of the Kingsguard brotherhood does it state that the Kingsguard are to beat women and children. Then again, they aren’t supposed to push ten-year olds out windows, bang their sister or kill their king either. But his logic is sound. The only thing that Trant does well is beat young women, which he does to Sansa Stark on a regular basis for King Joffrey. No time was worse than directly after her father’s execution and Joffrey forcing her to look at his head on a spike. May the Gods grant him a slow and grisly death some time soon.

8.) Did you take what was yours then?

It was that quote from Theon Greyjoy that earned him a reeling backhand from his father Balon. I swear, a lot of these slaps have the best quotes after them, but this one had a real zinger right before it. After Balon proudly states that Iron Islanders do not sow and take what is theirs, Theon shoots back with how his father gave him away as his last son when Robert Baratheon effectively crushed his armies and he bent the knee. Bad move Theon.

Oh Jaime and Cersei. Such a great brother and sister bond. After debating whether or not it was a good idea to push ten-year old Brandon Stark from a window, (Really?) Jaime makes up a name for a ballad involving Cersei’s vagina. She naturally takes offense and lets fly her hand on the Kingslayer’s face to which Jaime retaliates in a way he knows best… laughter.

Whilst the guest of House Bolton in Harrenhal, Lady Brienne was afforded every hospitality; from fine meals, bath houses… and bear fighting. After Locke decided to use Brienne for entertainment, she is put into a pit with a rather large bear and has to fight it with a wooden sword. Those are some great odds! Either way, Brienne earns a high up spot on the list for taking a nice left hook from the bear.

As entertaining as all of that was, I know everyone would rather see something like this:

Now, I’m not condoning the slapping of women in any way, shape or form; but I think a lot of people from both genders were happy to see this scene where Cersei tries to call out her husband and king in front of his best friend. King Robert even states that he shouldn’t have done it but damn… you gotta hate those Lannisters.

This was a double whammy from Uncle Tyrion straight to the smug mug of soon to be King Joffrey. After the Prince of Incest laughs at the notion of offering the Stark’s their condolences following Bran’s “accident” and scoffing at Catelyn Stark’s grieving for her son, Tyrion gives him one smack after another. And as the Hound says, Joffrey will definitely not be forgetting those.

Joffrey becoming king definitely means that you can never get slapped again, right? WRONG! As Joffrey rubs in the fact of his “father” Robert having plenty of bastards outside of his and Cersei’s marriage she takes the initiative to bitchslap her son in front of a lot of guards and peons working on the throne room. It was definitely only Cersei’s motherhood that saved her from this sadistic little bastard.

I don’t think that Joffrey getting smacked really ever gets old. He’s secured four different spots on our top ten list of slaps and they are all real gems. But none so more than this number one. After Joffrey takes a nice juicy turd to the face he demands that all commoners present are killed which is a bad decision for two reasons. #1: It incites a riot where a lot of people on both sides are killed. And #2: Joffrey gets the bitch slap of all bitch slaps from a familiar “hand”. That has a double-edged pun meaning that it was Tyrion once again during his tenure as Hand of the King. Tyrion quips to Joffrey after the slap –“And know I’ve struck a king. Did my hand fall from my wrist?”

So that’s our list. How’d we do miss any?