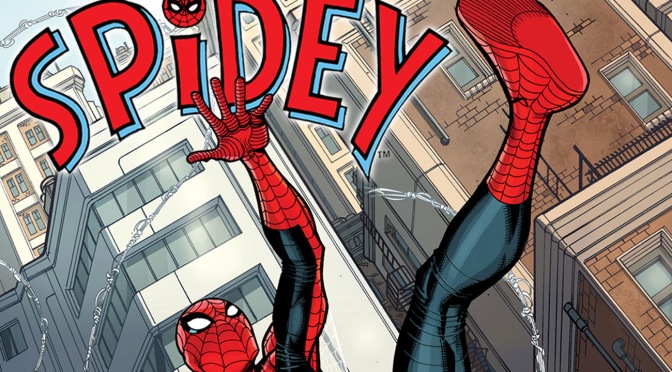 Listen up, true believers: looks like Marvel is bringing you 10 – 10! –Spider-Man-related titles. And the latest announced title, Spidey, shows that this “All-New, All-Different Marvel!” initiative is as interested in maintaining its classic past as it is in moving forward.

Spidey, a series slated to be written by Robbie Thompson, with Nick Bradshaw on the art chores, will tell in-continuity tales of Peter Parker’s past as a high-school student and a neophyte Spider-Man. Marvel’s Editor-in-Chief, Axel Alonso, characterizes the series as “an exciting new take on Spider-Man at his arguably most iconic incarnation….” However, that “iconic incarnation” lasted a very short time, as pointed out by Spider-Man Editor Nick Lowe, who notes that, “Out of the 700+ issues of Amazing Spider-Man, Peter Parker was only in high school for thirty issues!”

The series, which promises “familiar faces and new characters” alike, represents an opportunity to mine an iconic, yet largely unexplored, time in the Web-slinger’s life. It also bodes well for long-time fans who are worried about Marvel’s bold new direction, showing that Marvel is maintaining the flexibility to offer long-time fans something they may still want (classic Spidey) even as Marvel pushes forward with notably changed and diversified casts and storylines.

Earlier this month, Marvel announced and released preview art for 45 series in its “All-new” initiative. Thompson, a TV writer and producer whose credits include Supernatural and The Cape, looks to be writing two other titles in this new Marvel push: Venom: Spaceknight and Silk. Other Spider-Man-related titles that have been revealed as part of the “All-New, “All-Different Marvel” include Amazing Spider-Man (current-day Peter Parker), Carnage, Spider-Woman, Spider-Man (this one stars Miles Morales), Spider-Gwen, Spider-Man 2099, and Web Warriors.