In 1985 Robert Zemeckis and Bob Gale unleashed something incredible into the cinematic time stream. That something was a time travelling DeLorean. Of course this is when the now iconic science fiction comedy Back to the Future was released, and even though it only spawned 3 movies, it has still managed to capture our hearts and imaginations, as well as giving us a ruddy good laugh at the same time.

The evidence of this love and affection for the movies becomes quite clear just from the fact we are still talking about the films today. What with the merchandise and games affiliated with series, it becomes very apparent that the fans love of the adventures of Marty McFly, that’s not going away anytime soon. With the 30th anniversary of the movie upon us, Grizzly Bomb thought it would be a good idea to look at YouTube for evidence of the fans appreciation for the franchise.  Below, a selection of videos from a wide range of sources, from mash-ups, to parodies and science that will blow you away, all inspired by one film series.

It may seem old news now, but when gamers found about the Grand Theft Auto 4 variation which gave you control of the DeLorean they embraced it with open arms. It is still pretty darn impressive to watch even now and seeing the DeLorean in action is still something kind of special. The Mod itself started out as just a routine trip through the city scape, but was modified even further to incorporate a time travelling element into it to make it that much more awesome. 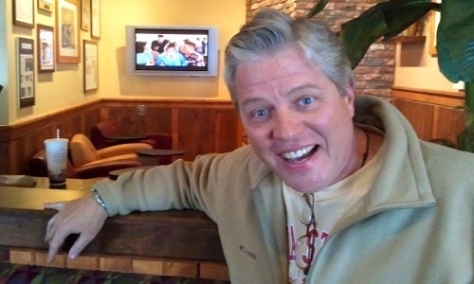 Tom Wilson has a life outside of Back to the Future. He is a successful comedian and song writer don’t you know? Well you probably don’t know because Tom did such a good job at playing the idiotic thug Biff, he still gets asked questions about it in the streets. He gets so many questions in fact that he has written a song about just what type of thing he gets asked about. Glad I saw this video now, as I would have dropped my foot in it and asked him some of these myself if I ever met him!

Back to the Future Cameo 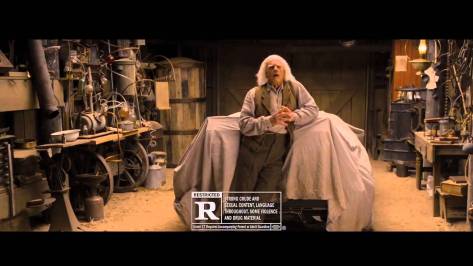 After the success of Ted, Seth MacFarlane seemed to have free rein to do whatever he wanted in regards to his next film. What he ended up creating was A Million Ways to Die in the West, a comedy western that most hoped would rank up there with the likes of Blazing Saddles, City Slickers and Cactus Jack (well I like it!). Alas due to a poor performance by Seth himself as leading man, and a mixed selection of jokes which mostly fell flat, the film never really went anywhere. One of the more memorable moments of the movie (other than Neil Patrick Harris and his incredible mustache) was the small cameo role including one Doc Brown, obviously an homage to Back to the Future III where he and Marty travel to the Wild West. Though never actually named in the scene we all knew what was implied here.

Blink To The Future 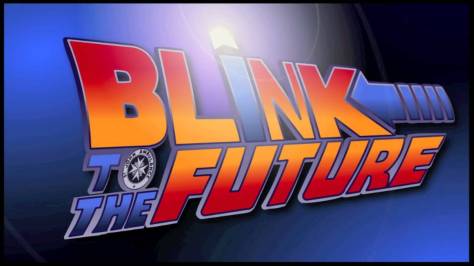 Before Lego was mixing it up with Doctor Who and Back to the Future meet ups, we had this video where Matt Smith’s Doctor gets up to some DeLorean style antics. YouTube video maker James Farr is well-known in animation circles for his amazing mash-ups of pop culture characters. Focusing mostly on video games and movies he has done some incredible videos meshing the Mario universe with Star Wars, among many others in his repertoire. This video works real well. The fact they are both time travelers helps, but James’ animation style and sense of humor make for a great short. You can see more of his videos on his YouTube channel.

Back To The Future – The Ride

I doubt I will ever get the chance to partake the ride of the Back to the Future ride in my lifetime. Being on the other side of the world certainly puts a bit of a damper on that. That and the fact as far as I know the ride is now closed. But that’s the joy of the internet, if someone filmed it then it will end up on YouTube. Just like that you can sit down in the comfort of your own home and watch the specially filmed scenes for this (what I can only imagine was an) amazing ride. This is probably for the best as I doubt my vertigo could have coped with the strain!

Back To The Future 2 Is Real!

Sam Macaroni has made some great little fandom based YouTube videos. His At the Office series are spot on and have high production values, as well as some surprise fan favorite actors and creators popping in to help out too. All these elements are blended into his homage to Back to the Future; Back to the Future 2 is Real! Sam plays Marty’s son Marty McFly Jr, making him just as obnoxious and slightly dippy as his film counterpart. But the surprise here is the great cameos with one character in particular standing out. Look out for Steve O from Jackass fame doing a spot on impression of Griff.

Back To The Future Live

Low budget shorts and movies have always had a soft spot in my heart, so when I found this Back to the Future presentation I was overjoyed. I can find little about its conception on the internet, but what I have pieced together it seems to be the brain child of one Samuel Edison. All I know about Samuel is that he has a wicked sense of humor and on a miniscule budget has created a hilariously fresh new take on the franchise. The lack of budget actually works in the plays favor, making it seem like a lost sweded version of the movie. But the real fun behind this is its portrayal of the characters and the great comedy banter that has been scripted out for the cast. One viewing will not be enough, much like the film itself you will be coming back to this countless times more.

I love it when cinema inspires people to create something incredible as an homage to what they love, and this video has to be the penultimate example of that. Hover Boards, real life flipping Hover Boards man! Sure it’s not neon colors and it only floats gently of the ground, but to actually have this in the world is simply stunning. Lexus is the company behind the Hover Board (or Slide as they are calling it) and you can see that incredible journey on their website.

Finally we have a plethora of Back to the Future anniversary events all teasing some pretty awesome things to come. First of we have the tantalizing teaser featuring the return of Doc Brown! The Doc Brown Saves the World teaser gives us very little to go on, just the Doc, the DeLorean and a white room full of science gear. But man seeing Christopher Lloyd’s crazy face again is enough for me. To find out more you will need to get your cash out and purchase the upcoming Blu-Ray release of the film series.

Following on from the Blu-Ray release we have an October 13th release for Telltale Games 2010 game Back to the Future. Set six months after the final movie, Marty has to figure out the mystery of a driverless DeLorean, and a visit to a teenage Emmett Brown. Some of the many upgrades to the game include behind the scenes videos on the creation of the game, graphic tweaking and new voice overs by Biff himself, Tom Wilson. This remastered game will be available on XboxOne and 360, as well as PS4 on October the 13, priced at $20.00 (at this time).

In a pretty awesome turn of events 2 aspects from Back to the Future 2 have actually become real (in a sense). Maybe inspired by the real life hover board we know have a Universal Films created Jaws 19 trailer, and Pepsi bringing out a limited edition bottle in the same style as the bottle in the movie! Called Pepsi Perfect, it comes in a great stylized bottle and will be on sale in small numbers from the 21st of October and priced at 20 dollars. These are two great editions and I kind of wish that every single version of Jaws had been made now!

It is great to see so much love for a film which has stood the test of time. I would imagine that 30 years from now people will be flying on their hover boards thinking that Back to the Future is a dated documentary, but for now we can enjoy the movies for what they are, fantastical fiction.