Welcome to the final installment of Grizzlybomb’s Greatest Joker Moment’s Ever! Brian Kronner and I (Scott Fraser) took a look through our memory warehouse and compiled a list of those moments that we felt made Joker who he is today. Obviously with the New 52/DCYou reboots the Joker of today may or may not have been affected by these moments, but we will look past that to continue to celebrate the awesomeness of the Clown Prince of Crime.

Whether he’s duking it out with Batman, intimidating fellow criminals, making time with Harley Quinn, or terrorizing the Bat family he is always in the forefront of the Bat titles, and is well-regarded as the ultimate Bat-villain. No other member of Batman’s rogue gallery has caused the level of pain and suffering to the city of Gotham quite like the Joker has, and the remaining moments on our list further prove this. So enough of the chit-chat, let’s get to it.

The most under appreciated, and oft-ignored Batman movie ever is 2000’s Return of the Joker. Perhaps it’s the fact that it stars Terry McGinnis as the Dark Knight and not Bruce Wayne, but this installment just doesn’t get the recognition it deserves. The basic premise, for those not familiar, was that in 2019 Batman is forced into retirement by a heart attack. 20 years later he finally passes down the mantle to a new crusader, with Bruce acting as an Oracle type from the cave. So, as the title indicates, the Joker reappears after a 40 year absence and wastes no time reclaiming his throne.

Thing is though, Joker sure seems younger than he should. Our explanation comes in the form of multiple flashbacks as Terry is forced to piece the puzzle together. We learn that Mr. J and Harley captured Tim Drake (Robin) and performed some heinous brain washing on the young lad, mentally braking him, and essentially turning him into a mini-Joker…

This was the first PG-13 animated feature that DC ever did, and the uncut version is rather dark…and AWESOME. Not only is young Robin tortured, but we see the Joker’s death. This is a must for Bat-fans every where.

4) Frames Batman For His Murder

When Frank Miller created The Dark Knight Returns it heralded in a new era for Batman and all his associated characters. It also took a serious look at the relationship between Bats and Joker, which changed the way a lot of us feel about these life long adversaries. Set in the future, TDKR takes us to a point where Batman has been retired for years, and his rogues gallery is no more. Joker in fact is in a catatonic state in a mental hospital, because without a Batman there is no reason for there to be a Joker. As Bruce Wayne realizes it’s time to come out of retirement, a darker and more violent Batman hits the streets of Gotham. This awakes the dormant clown prince, who once again sets out for a final battle with his love, the Batman. 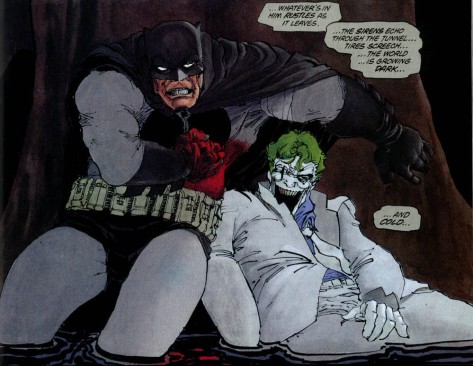 As the two meet up for their long overdue battle, Joker is once again disappointed as Batman fails to deliver the killing stroke, despite breaking his neck and leaving him virtually paralyzed. With the sounds of the sirens in the background and Batman once again hunted by the police, Joker does the last thing his warped mind can think of to truly punish his foe. Twisting his neck as hard as he can, he breaks his own spine while explaining to Batman that he will now be held responsible for Joker’s murder.

Joker dies laughing, as his final joke plays out exactly how he wants it. This is a moment that is seared into the minds of all Bat fans, as it truly shows just how far Joker is willing to go for the punchline.

Wow, poor Jim Gordon. The Joker just won’t stop screwing with the Commissioner’s family.  For those who don’t know who Sarah Essen is, she is first the partner, then the mistress, and eventually the 2nd wife of Batman’s best friend James Gordon. She first appeared in Batman: Year One, and then became a regular at the GCPD.

During the epically long story arc No Man’s Land, Gotham is laid waste by any earthquake and basically devolves into a dystopian setting where Batman is forced to reclaim the city piece by piece from the criminals and psychopaths who have taken control. Throughout the 80-plus issues that this story spanned, one of Batman’s chief concerns always remained that same. Where is the Joker? 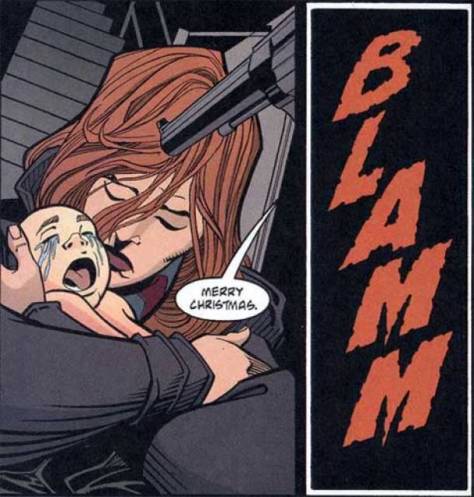 The clown had been mysteriously absent during the whole ordeal, and it’s not until the end that he finally emerges. His appearance results in the kidnapping of several infants, and their attempted rescue by Sarah. While Lieutenant Essen-Gordon does spare the children, she does so at the cost of a bullet to the skull. Not even the Joker really finds this amusing as he exits minus his usual grin. In the end, Jim shoots Joker in the leg, but the consequences stop about there.

This moment has a dark place in Bat history, as well as a unique moment in comic history. As part of the Death in the Family storyline, readers were encouraged to phone in and vote on the fate of Jason Todd, the second boy to be called Robin. Fans had never really warmed up to Dick Grayson’s replacement, and in a very close call, he was chosen to die by the readers. Of course, that isn’t what gets the death of Jason Todd on this list. Todd leaves Batman to hunt for his mother, who he previously thought dead. Finding her in Ethiopia, he learns she is in league with the Joker, which leads to a very unfortunate fate, but since it was decided by the readers it’s okay .

Joker spends a few panels beating Todd senseless with a crowbar, and then, just for good measure, blows him up with a bomb. Batman arrives on scene too late, which brings us the iconic image of Bats carrying Jason’s body out of the smoking rubble. This moment lasts into the New 52, and is one of the greatest and most personal defeats Batman has ever faced. It also started an obsession with the Joker to continue to torment the Robin’s in order to get to Batman again. Eventually Jason Todd returned and took over the previous mantle of the Joker, the Red Hood. If it wasn’t for the next moment on our list, the death of Jason Todd would have been number one with a bullet… or a crowbar.

Alan Moore and Brian Bolland’s The Killing Joke has quite frankly dominated this list with a number of incredible moments from the Joker’s career. Having already been mentioned twice, I’m sure nobody is surprised that our final and greatest Joker moment derives from one of the greatest Joker stories ever told. Barbara Gordon (formerly Batgirl) is sharing a cup of tea with her father, Commissioner James Gordon. A simple knock on the door is set to change everything for these two, as well as the rest of the Bat family forever. When Barbara (or Babs as she is affectionately known) opens the door, she is surprised to see Joker, garbed in a ridiculous Hawaiian shirt and over-sized hat. Without saying a word, he shoots her through the spine, paralyzing her.

This is all done for the purpose of kidnapping Commissioner Gordon, which makes the moment even more tragic. Joker has no idea that Barbara was Batgirl, and attacked her only to hurt her father in an attempt to drive him insane. Later he would torment a bound Gordon with pictures of Barbara after the shooting, as she lay naked on the ground in her own blood. We’ll see how much of this they keep the same for the upcoming animated adaptation. This is a key moment that not only showcases the extreme ruthlessness of the Joker, but also touches on his relationship with Commissioner Gordon, who has always been on the Joker’s radar as another playmate, second only to Batman. Barbara’s paralysis would become a big part of her future role as Oracle, and this moment will always be remembered as one of the most memorable of the Joker’s long and crazy career as the Clown Prince of Crime.

That brings us to the end of our look at the 20 Greatest Joker Moments Ever, and I have to say it really makes me want to go back and read (or watch) these moments and experience them all over again. Are there any moments you feel like we missed? We purposely left off Death of the Family and Endgame till they have some more time to sink in, as those stories are still resonating now.

Do some of the ones that we’ve picked resonate differently with you? Let us know in the comments section below!

“You just couldn’t let me go, could you? This is what happens when an unstoppable force meets an immovable object. You truly are incorruptible, aren’t you? You won’t kill me out of some misplaced sense of self-righteousness. And I won’t kill you because you’re just too much fun. I think you and I are destined to do this forever.”- Joker (The Dark Knight)