That’s right, the two behemoths are set to duke it out once again! In a joint statement, Legendary and Warner Bros. announced on Wednesday that they are creating a new unified cinematic universe that will feature Godzilla, King Kong and other iconic monsters. This comes on the relative success they had with Godzilla last year.

Godzilla vs. Kong will not be the first time the two have met on the silver screen. They fought one another twice in the 1962 film King Kong vs. Godzilla. In the film, Godzilla won the first skirmish forcing King Kong to retreat before seemingly losing the decisive battle after they plunge into the ocean and only Kong resurfaces. 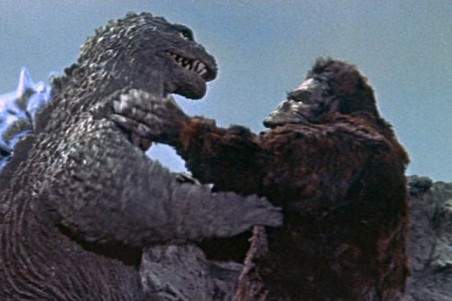 So far they have announced 3 more films to start the new cinematic universe; Kong: Skull Island in 2017, Godzilla 2 in 2018 and finally Godzilla vs. Kong in 2020 with last year’s Godzilla being the official first movie of the new universe. In addition to that though, we’re going to be getting more than just those 3 films as the press release goes on to say,

“All-powerful monsters become towering heroes for a new generation, revealing a mythology that brings together Godzilla and Legendary’s King Kong in an ecosystem of other giant super-species, both classic and new. Monarch, the human organization that uncovered Godzilla in the 2014 film, will expand their mission across multiple releases.”

Last year at San Diego Comic Con, Legendary announced that they had also acquired the rights to Mothra, Rodan and King Ghidorah from Toho, the Japanese film company that created them as well as Godzilla. These will surely be some of the classic “giant super-species” referred to in their announcement.

Legendary CEO, Thomas Tull and Warner Bros. Chairmen and CEO Kevin Tsujihara were clearly pleased to make the announcement Wednesday. “As a lifelong fan of these characters, I’ve always wanted to see the ultimate showdown, and today we’re pleased to be announcing that and more,” Tull says before Tsujihara continues, “It’s great to be able to revisit these characters and help create a franchise with so many creative possibilities for filmmakers. Fans love these big, globally iconic films and it doesn’t get any bigger than this.”

Are you as excited as my inner 10 year old self is? Or did you not like last year’s Godzilla reboot and think this is a terrible idea? Leave a comment and let us know!

Stay up to date on our Countdown to Halloween and take a look at the Friday the 13th game being developed and the new trailer for The Boy featuring Lauren Cohen. For more Godzilla and King Kong fun check out why Kong would lose a fight with Godzilla.

One thought on “Countdown to Halloween: Godzilla v. King Kong Coming in 2020”