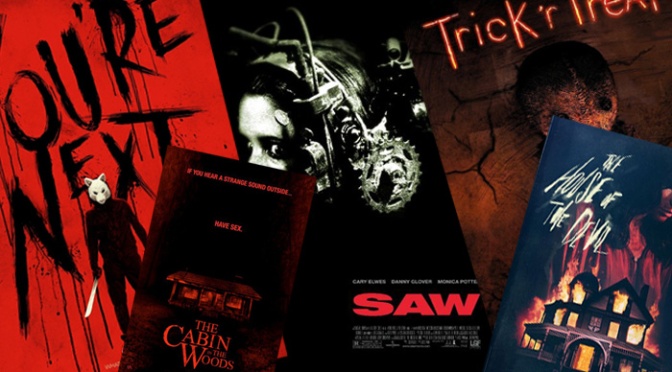 Almost anyone you ask will tell you that horror’s Golden Era resides firmly within the ’80s (though the ’90s certainly held their own). How could it not be the ’80s? It was the decade of slasher villains, practical effects, and kickass synthesizer soundtracks. Not to mention just sheer greatness in numbers; we’re lucky to get one good horror movie a year nowadays! But one of the last gems of that era, Scream, has proven to be both a deafening end to the heyday of horror, and the beginning of something new.

Though it so effortlessly brought together and celebrated all the essential trademarks of the films before it, it effectively labeled the entire genre as silly and clichéd, not unlike what the Austin Powers films did for the James Bond series. Post Scream and its subsequent imitators (I Know What You Did Last Summer, Urban Legend, etc.), the state of horror has been hard to nail down. I’ve broken things down to a few major categories to give you a better grasp on what horror means to the millennial generation.

This retrospective of modern horror may prove to be a bit long-winded for some of you; in anticipation of this, I’ve made a short list of my favorite picks. So, for the TL;DR crowd, here’s the best ones… you impatient animals.

There ya go, hope you’re happy! Now, back to business.

One thing this world has been lacking since Y2K is your traditional leg dragging, brain eating, slow zombie. Long gone are the zombies of Return of the Living Dead (my personal favorite zombie film, for countless reasons). What we have to cope with now, excluding The Walking Dead, is the dominance of the Fast Zombie. Screaming, shrieking, sprinting, the fast zombies have come full force. Many people thought that this first started with the remake of George Romero’s Dawn of the Dead, but 28 Days Later is the actual Patient Zero.

28 Days Later featured a new species of zombie that just doesn’t stop, running at full speed instead of trudging along, and no longer focused on eating brains. It also placed more focus on zombies being caused specifically by disease rather than anything occult or supernatural.

Speaking of Dawn of the Dead, another hallmark of modern horror, and honestly modern film in general, is the remake. It seems like Hollywood just can’t resist trying to suck every last bit of life out of any film that was mildly successful. Since the 2000s, we’ve been graced with less than satisfactory revivals of major franchises like the Nightmare on Elm Street and Friday the 13th series. There have also been successful remakes, or at least one that I know of, such as the Evil Dead remake. I personally was very apprehensive about Evil Dead being remade, specifically their replacing of Bruce Campbell’s iconic ash character with a female protagonist.

My fears were not only proven to be misplaced, but also sexist, as it turned out that what holds the Evil Dead series together so well isn’t a male lead, but simply a strong and proactive leading character. Life is full of little surprises like that, but sadly most of the other remakes this last decade and a half aren’t surprising at all.

So far I’ve sounded pretty negative, so let’s move on to what I would consider the bright shining future of horror. The light at the end of the tunnel of terror, if you will. Gaining its label from the film subgenre “Mumblecore”, which being light on the details essentially means low-budget, low production value drama with attention to detail and naturalistic dialogue. Hipster Indie-films. MumbleGORE on the other hand is typified by nostalgic horror directors with extreme care and love of their craft, using techniques emulating the films they fell in love with in their youth. It’s being pioneered by directors AJ Bowen, Ti West, and Adam Wingard, among others.

These horrors recall the look, feel, and pacing of the 1980s; Ti West went so far as to shoot The House of the Devil with 16mm film, and released promotional copies of his film on VHS. The House of the Devil is my favorite example from this genre, and my absolute favorite horror film of the modern era, but I have to warn you that it is very much a slow burn, and should only be watched if you plan on devoting your full attention to it. Another great thing about this genre is the resurgence in synthesizer scores, most recently noted in David Robert Mitchell’s It Follows. I strongly recommend the films below.

*Not technically a mumblegore film, but still within the same feel of the genre, courtesy of Rob Zombie

One of the most recognizable genres to come out of modern horror, possibly what will go down as the period’s hallmark, is the “found footage” film. For those who haven’t seen a movie trailer in the last 15 years, Found Footage films are when all the cinematography is done in a way that’s made to look as if the entire movie was filmed on a personal video camera in real time, typically shot in the first person.

For many of you, this has been the worst thing to happen to horror in your lifetime, and we all have The Blair Witch Project to thank. I still remember stories from when that film first came out; people passing out and vomiting in the aisles, both from terror and the visual whiplash of the camerawork. Blair Witch spawned dozens of imitators over the years, some of them genuinely scary, but many MANY more that were not.

It’s hard to think of a more quintessential horror film than The Exorcist. The first horror film to be nominated for Best Picture, nominated for 10 Academy Awards in total (winning 2), and widely known as one of the scariest horror films ever made, it holds a lofty place in the world consciousness. It only makes sense that The Exorcist would have plenty of imitators, and in that respect it does not disappoint.

Once I hit 16 and was finally able to drive myself to see an R-rated film alone, I’ve personally watched dozens of these exorcist rip-offs in hopes that one would finally inspire a feeling like that of its source material. Sadly, I’m still out there searching. There have been glimpses though. 2014’s Deliver Us From Evil was complete garbage for almost all of its 120 minute run time, but the last ten minutes provided one of the most intensely powerful exorcism scenes I’ve come across. It’s those little gems that make the genre worth an occasional sifting through, so have at it.

Now this is a genre that is as closely tied to, and influenced by Scream as anything out there. This is where horror takes a look at itself and produces something self-referential, and witty, but still had a jump factor to it.

These movies have proved to be some of the most entertaining of the who modern era. The Cabin in the Woods is a perfect example of this, combining lots of familiar horror themes, pointing out the absurdity, and then making the joke scary.

Vampires Out the Ass

Thank Twilight, thank True Blood, thank Bram Stoker if you want, but the 2000’s have firmly chose the vampire as their “spirit monster.” The amount of vampires in horror over the last 15 years has made me wish that a vampire would just go ahead and rip my god damn throat out. Zombies too for that matter, but I find it easier to discern the better entries when it comes to zombies for some reason.

I’m not gonna lie, some of these could be GREAT, but I’ve just grown so worn out on the whole concept, that I don’t even entertain watching a vampire film nowadays unless I’ve been told specifically that I’m missing out. Lucky for you, I’ve distilled it down to a few of the better ones below.

This is where I feel I need to remind you that I’m coming up with the titles for most of these genres, if you hadn’t already grasped that by “Vampires Out the Ass”. This one is another that I feel may just be something I’ve noticed, but god damn is it prevalent. Ever since CGI reared its ugly, non-convincing head, we as an audience have been subjected to a menagerie of wide-mouthed gaping monsters. What the hell am I talking about?

Countless films in this modern era, when faced with the question of what will their monster look like, simply go “fuck it, just slap some CG on it and make its mouth open real big and long!” I know this isn’t a genre, but I just have to release my frustration about this somewhere. It is honestly one of the greatest causes for my despair over the entire genre these last few years, to the point where if I see a shitty long mouthed creature in the trailer, I automatically decide against seeing it. Maybe I’m a practical effects snob, but I’m fed up, goddammit! Like most things, a selection of these films are watchable, such as I Am Legend, but you’re gonna have a hard time getting me to admit to more.

Rise of the Anthology

An absolute favorite of mine when Halloween season rolls around is the tried and true horror anthology film. An anthology film is a movie comprised of a collection of independent vignettes or interrelated short story lines within a film. Classic examples from the past would be the Creepshow films or Twilight Zone: The Movie. The rise of nostalgic directors, having grown up on these classic anthologies, has brought with them a new wave of horror anthologies to the delight of scare hungry fans everywhere.

The beauty of an anthology is not only do you get more bang for your buck when it comes to spooky stories, but you really open up the gates when it comes to creativity; The ABC’s of Death has a whopping 26 SEGMENTS from all across the globe, granted that not all of them, if not the majority, are of the greatest quality. But something of an intangible quality that anthologies seem to have is just a sincere love of the genre, something that shines brighter than any beacon in Michael Dougherty’s Trick ‘r Treat.

So there you have it, a grand overview of horror2K. I think it’s pretty obvious that I have my favorites, and that I created some of these just to purge some much deserved hatred. But I couldn’t be more excited for the future of horror. Many new directors have taken it upon themselves to treat the genre with the respect it deserves, refusing to allow studios to walk all over them or their vision. They know the movies that we love, and are doing their damnedest to make us feel that way again.