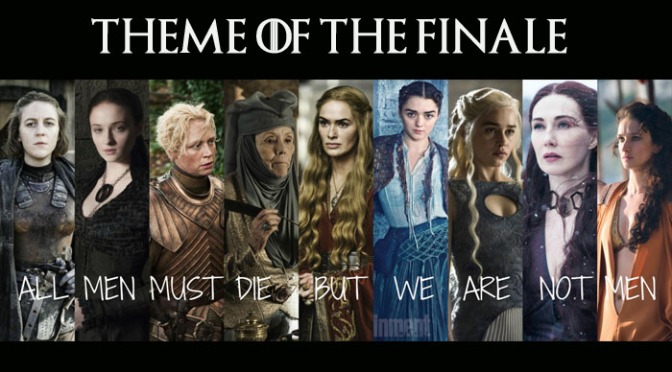 Many people last week proclaimed Battle of the Bastards the greatest episode Game of Thrones had ever delivered – there is an argument to be made for The Winds of Winter holding that title.

Season six, while uneven and rushed in spots, delivered big time. From the death of Hodor to the battle of Winterfell, this season has seen some truly great moments. Leaders have fallen (Blackfish, Balon Greyjoy, Doran Martell, Roose Bolton, Alliser Thorne, the Khals of Essos), castles have changed hands (Winterfell, River Run) and new alliances have been formed. This season was all about settling scores and tying up loose ends, and now the real war draws near.

As eventful as the first eight episodes were, the last two Sundays gave us maybe the best back-to-back showing in television history. Last week was technical mastery – from shooting the battle, to the stellar use of CG, to some long-awaited fan appeasement, it was phenomenal. And that makes that much more impressive they were able to do it two weeks in a row. Last night’s finale had the longest runtime of any episode to date, and they wasted almost none of it (sorry Sam). A lot happened, so let’s break it down in pieces and see what it means going forward…

Cersei and the Sept; Ascension of a Queen

Love her or hate her, Cersei has been a principle player dating back to the pilot episode. While often misguided in directing her rage, many of her motivations were understandable – she cared for her children and would protect them at any cost. She just wasn’t very good at it. And now, with her eldest children dead, and her youngest with his back turned to her, stealing away her trial-by-combat card, Cersei lashes out like a caged animal and destroys several of her enemies in one fell swoop. The wildfire under the sept had been foreshadowed multiple times, and with its ignition went six named characters; the High Sparrow, Hand of the King Kevan Lannister, Lancel Lannister, Margaery Tyrell, Loras Tyrell, and Mace Tyrell.

At the same time, but not a direct result of the fire, Grand Maester Pycelle is murdered as well, a death that was a long time coming. The death that Cersei did not plan however, was that of the King, young Tommen Baratheon.

Tommen’s suicide opens the door for Cersei to simply take the throne for herself, something she didn’t originally intend, but that she’ll work with. Long Live Cersei the Cruel and Self-Indulgent?

WHAT DOES IT MEAN: This provides a capable and deserving target under the crown. It would be harder to root for Dany or Littlefinger to kill young Tommen, who was a good person as far as we could tell. But putting the reviled Cersei in the big chair gives us a villain. Her imprisonment and children were two things that humanized Cersei, and now those things are gone. To see how cold she was following Tommen’s death and the torture of Septa Unella from her zombie bodyguard, that humanization is all evaporated. Bring on the war of the Queens.

Before returning to King’s Landing to find his son dead and his sister marching to the throne, Jamie feasts with Walder Frey. Durning this meal, the Kingslayer makes no attempt to hide his contempt for the old man, bluntly stating how useless the Freys are to the Lannisters. What Jaime does not know is that his sister is stacking up enemies south of him, and the Starks have retaken Winterfell to the North.

WHAT DOES IT MEAN: With the Boltons extinct, and the Frey army in disarray, the Lannisters are running short on allies when they need them most. Perhaps it’s this knowledge that has Jaime looking so displeased when he sees his sister in that chair of swords.

Sam and Gilly at the Citadel

Ok, here is the five minutes of the episode that most people would have been fine without – Sam and Gilly arrive at the Citadel, which is the center of all recorded knowledge in Westeros, and we are quickly shown knowledge isn’t always akin to wisdom. I suppose Pycelle was always an example of that. The citadel doesn’t allow women or children entrance, and as far as they knew, Lord Mormont was still in charge at the wall. That situation changed a long time ago.

WHAT DOES IT MEAN: Less than we thought it would. Sam is there to learn, but he has no Commander Snow to return to. I’m sure Gilly and little Sam will have a place at Winterfell if they want it, but the Night’s Watch could be all but over with by the time Sam returns. Should Jon and whatever army he can raise, along with Dany and her dragons, be enough to defeat the army of the dead, it seems like there won’t be much need for the wall to stand any longer. The Wildlings are already inside after all.

Davos and the Red Woman

Shireen Baratheon was finally spoken for. In one of the show’s most horrific scenes, Stannis allowed his only daughter to be burned at the stake to win favor with the god of light. This was back in 5.09, and now, eleven episodes later, the Red Woman is confronted about it. Davos, furious demands her head. This is where Jon Snow shows his worth as a leader, he could easily do as Stannis did before him and lean on Melisandre’s magic to help him in the war to come – but unlike Stannis, he does not forgive this behavior. And while Jon doesn’t execute the witch, he does banish her south.

WHAT DOES THIS MEAN: This is all in line with typical Stark behavior. Think back to Robb beheading Rickard Karstark. Strategically, it was a terrible move. It hurt morale and cost him a large portion of his army, but he felt it was the right thing to do. Ned refusing to sanction a hit on Dany in season one, not the smart move, but the right thing to do. Now, Jon could have killed Melisandre, but he does owe her his life, so she heads south, and will no doubt become an asset sometime in the future. Good move by Jon.

Ellaria Sand and Olenna Tyrell fall in the Arya Stark parallel of vengeance. Everyone one they care about was taken from them by the Lannisters, so as many predicted weeks ago, they made a logical pair. What we didn’t know at that time was Olenna would be the last Tyrell standing when the deal was made.

WHAT DOES IT MEAN: Well, the appearance of Lord Varys means that Dany will have troops on the ground already waiting for her when she arrives in Westeros. The Lannisters are in more trouble than they know.

The Hand of the Queen

Dany dumps Daario much more easily that she did Mormont. This is a maturing of our young Queen to be, and for the first time we have a leader who actually listens to Tyrion, something the audience has wanted since it all began, and something that Lord Varys hinted at years ago. Tyrion could be the greatest Hand in the history of Westeros if he only a ruler worhty of the people.

WHAT DOES IT MEAN: The Mother of Dragons will arrive in the west unencumbered, and open to alliance proposals through marriage. Whom though will she marry? Jon seems the only man left in all of Westeros with any clout at all. It’ll be interesting to watch, however it turns out.

Walder and his Sons

When last we saw Arya Stark, she was ready to bolt Braavos and head home. That was in episode eight, and some worried that we might need to wait until season seven before we saw her again. But last night show runners D.B. Weiss and David Benioff rewarded fans with a surprise appearance. Something that I was hoping would happen, and thrilled when it did – Arya shows up at the Twins in another face, and attempts to feed Walder’s sons to him. Then she murders him with a smile on her face.

WHAT DOES IT MEAN: Arya is hands down my favorite character, and it’s sweet satisfaction when she gets to cross names off her list, but this is no longer the spunky little girl who we saw chasing cats in the Red Keep. Arya has had a dark, violent path since Ned died, and she is changed. Once her list is complete, where does she go from there? Can she ever return to Winterfell? Will she reunite with her siblings? Her path is a mystery from here, but we can hope she at least checks in with the new rulers of the North.

The Tower of Joy

When we finally check back in with Bran and Meera, they are parting ways from Uncle Benjen and heading south. (Is Meera gonna carry Brann Hodor-style?) Before they start their trek (to Winterfell hopefully?), Bran re-enters the roots of the Godswood tree to take us back to the Tower of Joy and young Ned Stark. It is here that a near 20-year old fan theory is proven correct. Jon Snow is not Ned’s bastard son, but instead the nephew of Lord Stark, son to Lyanna Stark and Rhaegar Targaryen. That changes things huh?

WHAT DOES IT MEAN: Jon Snow has Stark blood still, but now it’s mixed with Targaryen as well. Does this signal a logical alliance between he and Dany? Will Bran make it back to Winterfell in time to deliver this news to his siblings? From Bastard to King, it’s Jon Snow’s story that is the Song of Ice and Fire.

The King of the North

We’ve seen this before. Robb Stark was named King of the North by bannermen eager to follow him. Now Jon Snow has the same honor, thanks to the recent emergence of BEST NEW CHARACTER AWARD shoe-in Lyanna Mormont.

WHAT DOES IT MEAN: First it means, Bear Island is about to get a promotion in standing with the new King. But more importantly, it opens the door for Littlefinger’s proposal to carry more weight with Sansa. Despite the sibling bonding session from earlier in the episode, Sansa learned in King’s Landing that trust shouldn’t be given easily, and she’s still keeping Jon at arm’s length. Littlefinger can’t be trusted, but there is something to going with the devil you know, and she did crave a seat at the Red Keep once upon a time. If she thinks she can control Petyr Baelish, she in the south, Jon in the north, she might be willing to give things a go with the former Brothel owner.

The moment fans have been clamoring for since 2011, the Dragon Queen is finally sailing west. She has ships, dragons, and an army. The Dothraki (whom Robert warned Westeros would be defenseless against in season one), the Greyjoys, the Unsullied, the Tyrells, the Sand Snakes – Dany is set up nicely. Add all that to a general dislike for Queen Cersei, and the people may be ready for the return of a Targaryen.

WHAT DOES IT MEAN:

Now only 42 or so more weeks till the next episode! We’re already feeling impatient. Be sure to keep checking back in at Grizzly Bomb for updates on Game of Thrones in the meantime.