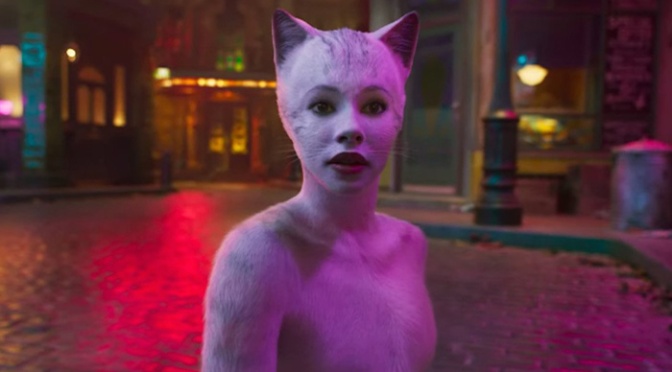 Universal has debuted the first official trailer for Tom Hooper’s big new movie musical Cats, based on Andrew Lloyd Webber’s famous Broadway show and what the fuck did I just watch?

The first trailer for the film was supposed to arrive on Friday but instead hit today, showing the cast in slick, body-fitting feline form, prancing and prowling to the ever-recognizable song “Memory.” Ahead of the official trailer, Universal released a behind-the-scenes featurette on Wednesday showing the stars of the movie exploring the set and talking about their love of all things theatrical. This trailer is every bit of WTF-ing you could imagine.

Check out the first trailer for Cats below:

Cats debuted on the West End in 1981, coming to Broadway in 1982, and at one point held the title of longest-running Broadway musical before being overtaken by another Lloyd Webber musical, Phantom of the Opera. Loosely based on poems by T.S. Eliot, Cats is about a group of cats known as the Jellicle cats, who dance around and introduce themselves, while deciding which one of them is worthy enough to ascend to heaven. Yes. That’s right, a musical with cats named things like Grizabella, Flirtatious Bomberlarinna, Macavity, and Bustpher Jones trying to see who is worthy of getting into their Cat afterlife is now a movie.

The star-studded movie boasts Jennifer Hudson as fallen woman-cat Grizabella, Taylor Swift as flirtatious Bomberlarinna, Idris Elba as Macavity the mystery cat, and Ian McKellen as the thespian Gus the Theater Cat, among others. Which is already a stacked cast. Toss in great choreographers and so-called state-of-the-art “fur technology” and this is starting to resemble some sort of drunken nightmare. Cats itself (apart from maybe the most famous tune, Memory) is not a great musical. It concerns a bunch of furries introducing themselves, talking about ascending to the aforementioned afterlife and then buggering off.

Now, we have Tom Hooper, coming off his indulgent, self-aggrandizing version of Les Miserables (don’t even get me started on him taking the Oscar away from David Fincher and The Social Network) and saying to himself “Okay. Now I’ll extend this into a 2+ hour movie with some weird freakin’ CGI over-layed actors!” Boom! We get Judie Dench looking like a drunk Snapchat filter.

Along with the team of executive producers, Stephen Spielberg, Andrew Lloyd Webber, and Angela Morrison, Cats will be produced by Working Title Films in alliance with Monumental Pictures and the Really Useful Group. One of the longest-running shows in West End and Broadway history, Cats received its world premiere at the New London Theatre in 1981—where it played for 21 record-breaking years and almost 9,000 performances. The groundbreaking production based on T.S. Eliot’s “Old Possum’s Book of Practical Cats” was the winner of the Olivier and Evening Standard Awards for Best Musical. In 1983 the Broadway production became the recipient of seven Tony Awards, including Best Musical.

You can also check out the very basic poster for the film below:

Cats is set to hit theaters on December 20.