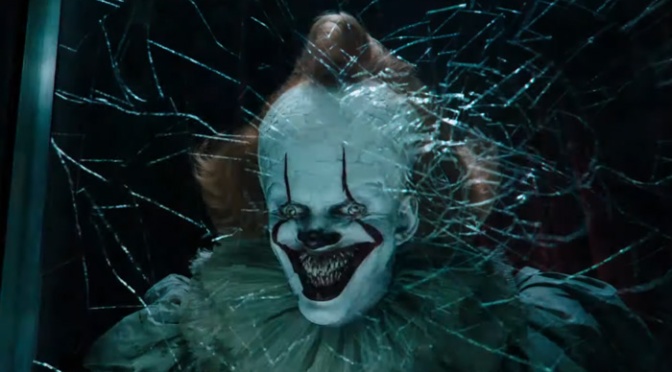 Warner Bros has unveiled the latest trailer for IT: Chapter Two, the highly anticipated sequel to the 2017 hit film based on Stephen King’s acclaimed 1986 novel.

Twenty-seven years after the events of the summer of 1989, It (Bill Skarsgård) returns. The Losers’ Club fulfills their promises and returns to Derry to put an end to the evil being once and for all. Unbeknownst to them, It has returned, stronger and crueler than ever.

Check out the new trailer for IT: Chapter Two below:

The main focus of this trailer is on the Losers Club. Played now by a more recognizable adult cast which includes James McAvoy as Bill, Jessica Chastain as Beverly, Jay Ryan as Ben, Bill Hader as Richie, James Ransone as Eddie, Andy Bean as Stanley, and Isaiah Mustafa as Mike; plus Jess Weixler, Teach Grant, Jake Weary, and Xavier Dolan. However, of course, they’re also showcasing Pennywise. The last shot of this new trailer is a real bone chiller as Bill Skarsgård continues to prove that he was more than an inspired choice for the role.

But the kids will be back, too. Even though the sequel will focus on Pennywise’s return to Derry in 2016, we’ll still see all the younger kids by way of flashback scenes. “On the second movie, that dialogue between timelines will be more present,” director Andy Muschietti said. “If we’re telling the story of adults, we are going to have flashbacks that take us back to the ’80s and inform the story in the present day.”

The second part of IT is written by Gary Dauberman from the book by Stephen King and is directed once again by Andy Muschietti. The first chapter debuted in September of 2017 to the tune of $123.1 million on opening weekend, the highest opening weekend ever for a September release, for a fall release, and a horror movie.

A teaser trailer was released on May 9, 2019, and accumulated 39 million views and focused primarily on one particularly memorable scene from the book. Beverly is invited in for tea, quickly growing uneasy by the old family photos on the walls, in which she spots Pennywise more than once. As Mrs. Kersh tells her about her father that joined the circus after coming to the United States, things got very creepy after that. It was a great way to promote the film. Not giving too much away but instead, showcasing a scene from the film itself as the trailer’s main attraction.

You can also check out the intense new poster for IT: Chapter Two as well.

Pennywise will return in theaters and IMAX worldwide on September 6, 2019.