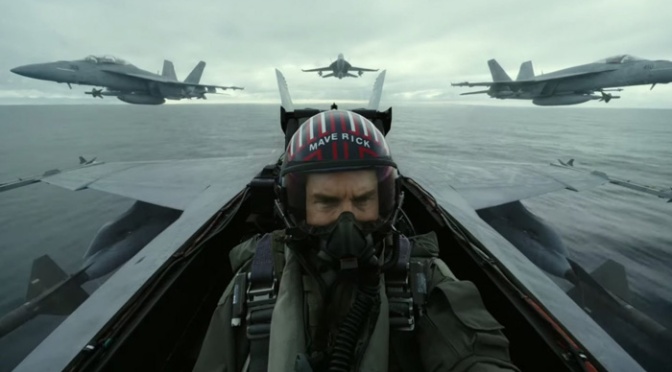 Top Gun: Maverick is set in a world of drone technology and fifth-generation fighters along with exploring the end of the era of dogfighting. Maverick (once again played by Tom Cruise) is now a flight instructor, who takes Bradley Bradshaw (played by Miles Teller), the son of Maverick’s late partner Nick “Goose” Bradshaw, under his wing. The film also stars Jon Hamm, Val Kilmer, Jennifer Connelly, Glen Powell, and Ed Harris.

Check out the first trailer for Top Gun: Maverick below:

The trailer was brought on to a surprised audience in Hall H at Comic-Con San Diego earlier today. But what a welcome surprise. We get a nice, slowed down melody of the film’s original music cues, Cruise back in action, and, of course, volleyball because we know they know what their movie was all about in the end. On a more serious note, the film’s aerial sequences look next level, incorporating some of the best photographic techniques including shooting in 6K. “Everything you see in this film is very real,” said Cruise of the film’s in-air scenes and stunts before introducing the film’s first trailer in Hall H.

A follow-up to Tony Scott’s 1986 hit has been in the works for quite some time, with Tom Cruise interested in reprising his role as United States Naval Aviator Lieutenant Pete “Maverick” Mitchell. Producer Jerry Bruckheimer previously outlined that the film will deal with the rise of unmanned drones and pilots becoming a thing of the past. Joseph Kosinski, who previously directed Cruise in Oblivion, will helm the sequel, with Peter Craig, Justin Marks and Eric Warren Singer penning the script along with long-time collaborator of Cruise’s, Mission: Impossible mastermind (as of late), Christopher McQuarrie.

Check out the teaser poster for the film as well: