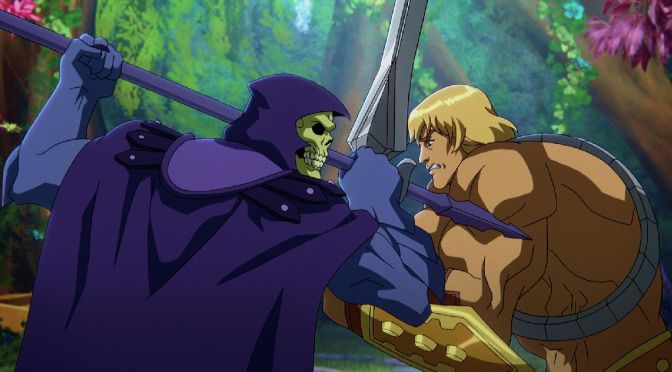 Netflix’s reboot of the beloved 1980s cartoon will be released later this July, but the first trailer is already out for Masters of the Universe: Revelation!

The war for Eternia culminates in Masters of the Universe: Revelation, an innovative and action-packed animated series that picks up where the iconic characters left off decades ago. After a cataclysmic battle between He-Man and Skeletor, Eternia is fractured and the Guardians of Grayskull are scattered. And after decades of secrets tore them apart, it’s up to Teela to reunite the broken band of heroes and solve the mystery of the missing Sword of Power in a race against time to restore Eternia and prevent the end of the universe.

END_OF_DOCUMENT_TOKEN_TO_BE_REPLACED

Oh, the power of comics. Thirty years ago, this was unimaginable – the goofy cartoon with the best cheese-to-fun ratio, He-Man and the Masters of the Universe, and the cartoon with the slickest animation and coolest characters, The ThunderCats, were the top of the top in terms of after-school entertainment. Two fun shows with the two most-iconic swords; two shows with decidedly different vibes; shows that could coexist in a TV-watching lineup but never in the same story or space, save for the imagination or perhaps the toy box.

END_OF_DOCUMENT_TOKEN_TO_BE_REPLACED

We haven’t seen much from the upcoming reboot of the Masters of the Universe series since we last heard that director Jon M. Chu was out in favor of Jem and the Holograms. We also heard that a script rewrite has been handed in by Jeff Wadlow, who directed Kick-Ass 2 and has been connected to a rumored X-Force film for over a year now.

The latest news from the reboot comes from DeVon Franklin, the SVP of Production for Columbia, who has kept the news on this film alive over the last few months. He revealed on Twitter what appears to be a legitimate title card for Masters of the Universe, which would make this the first official image from the film if it is confirmed.