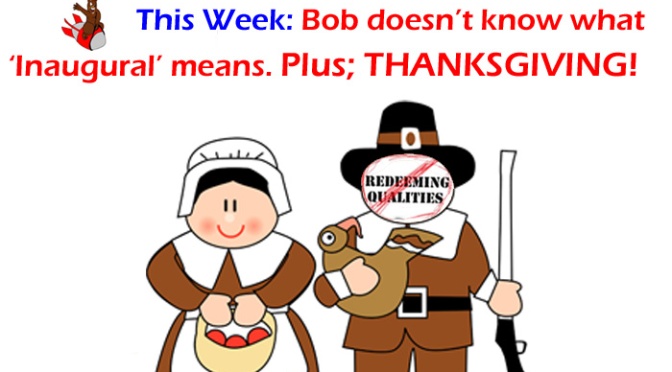 Grizzly Bomb is proud to continue our partnership with the No Redeeming Qualities Podcast! Bob and Zipp are back this week for race talks and Thanksgiving!

END_OF_DOCUMENT_TOKEN_TO_BE_REPLACED

For me Thanksgiving has always been about Detroit Lions Football, good food, and family. Probably in that order too. But that’s not to say that there aren’t some fond memories of the occasion watching something other than Football. The following list of films are those that are, at least in part, dedicated to the 3rd Thursday of each November. Now being sandwiched in between Halloween and Christmas, the 2 days that have inspired the most movies doesn’t leave us with the widest selection, but there is no shortage of quality.

END_OF_DOCUMENT_TOKEN_TO_BE_REPLACED

After 2007’s Grindhouse, the many fake trailers that played between the double feature are now actually being updated into feature films. It started with Machete, moved on to Hobo with a Shotgun, and is now making its way to Thanksgiving, the Eli Roth directed slasher film that takes place on the 3rd Thursday of November. Following in the footsteps of two excellent Grindhouse homages (Hobo with the Shotgun being the better of the two), Eli Roth looks to continue the trend with what he hopes will be a great addition to the series.

I’m also a bit skeptical about the whole thing because unless he finds a way to make a story out of it, it might become a little bit repetitive and monotonous. What made the trailer great was that at no point did it ever hint that there’d be a story. It just killed teenagers for two minutes in creatively hilarious ways. A deeper investigation into the killer’s motives might be interesting and of course the one protagonist who seems to always escape the killer’s clutches.

You can check out the original Thanksgiving trailer below and leave your opinions under that. If you had the chance to write the screenplay for this movie, what major changes would you make to the story, if any at all?

The things I think need to be in the film are:

Well, folks, there’s good news and bad news. The bad news is, the Anchorman sequel is pretty much a no-go. Will Ferrell claims that there were places for the film to go, but the sequel itself isn’t really holding up. Now for the good news. Back in May, Ferrell said that he, John C. Reilly, and Adam McKay were considering doing a sequel to Step Brothers. That consideration has now become a reality. The trio is now working on a script that they will hopefully begin to film in Fall of 2012.

Another script that Ferrell and McKay have been talking about is the film Three Mississippi. The story would follow an annual game of Thanksgiving tackle football that gets a little bit out of hand. Knowing Ferrell and McKay, they can make literally anything funny, so I’m actually really excited to see that finally come to life. But until then, Step Brothers 2 is something that I’m also quite excited to see come to life. The first one, to me, is a modern comedy classic just based on how raunchy and childish it is. Ferrell, until that point, had found a nice niche in PG-13 comedies, but as soon as the line, “I’ll drop that motherf–ker!” was uttered from his mouth, I knew I was in for a good time.

It’s just that John C. Reilly is such a talented and respected actor, and it was hilarious to see him like a complete man-child. When you’re watching Mr. Cellophane tell somebody, “We’re here to f–k shit up!”, there’s a little bit of shellshock going on.

If you want to relive some of the zaniness that was Step Brothers, check out this video right here:

Oh dear lord, Adam Sandler. What the hell happened to you?

I’m going to skip the formalities here and get right down to it, Jack and Jill royally sucks ass. I’m not one to use these terms loosely, because to be honest, not a lot of movies necessarily suck ass. Let’s take a movie I reviewed earlier this month, Like Crazy. Was it a bad movie? Yes, it was. Did it suck ass? No, it did not. Allow me to further my point.

Jack and Jill, as you may have heard, is about two identical twins that go at it during Thanksgiving, Hanukah, their respective birthdays, and New Year’s. Literally the entire movie is fighting and a creepy Al Pacino, which I’ll get into a little bit later. The premise, which revolves partially around getting Jack’s sister Jill out of the house, and the rest of the plot, involves getting her to stay. Now, call me crazy, but I think that’s considered a conflict of interests on the part of the borderline schizophrenic lead, Jack.

He truly is an ass. A royal ass one could say. He treats his sister like she’s dirt. He sets her up on dates with weird men, he bullies her every chance he gets, and he ultimately uses her to get Al Pacino to do him a favor. He brings the term “dick move” to a whole new level.

Adam Sandler pretty much does the same thing in a lot of his movies. I know damn well he’s a capable actor and that he really does know how to pull out a good performance (e.g., Funny People and Punch-Drunk Love).

Here, on the other hand, he does the usual Adam Sandler performance. Angry, oppressed, needy, and whiny. Except he does it in a way that gives off the feeling that he was quite bored during shooting. He exaggerates everything to the max, and it seems that he’s been playing the asswipe father in quite a few of his recent movies, and I’m starting to think that that’s just how he is in real life.

As Jill, on the other hand, he’s ferociously aggravating. Everything that Jill does, I want to just punch her in the nose for. It’s the 2nd most inspired thing in the entire movie though, behind the one and only, Al Pacino. I laughed twice in this movie. Two times. The first time involved Al Pacino in a disguise. The second time involved Adam Sandler as Jill farting aggressively in a bathroom. Farts are funny people, get over it.

Anyway, Al Pacino. What can I say about Mr. Pacino’s performance? Well, it was…inspired. He really did give it his all and I commend him for his bravery. I really do. Any self-respecting actor who can really put his heart into a project like this is truly brave, or completely insane. Most of the times it’s both, though.

But, back to the bashing of this flick, I have a message to Adam Sandler. WE UNDERSTAND THAT YOU ARE JEWISH. WE UNDERSTAND THAT YOU ARE PROUD OF THIS, AND WE APPRECIATE IT. WITH THAT BEING SAID, WHY IS THE FACT THAT YOU’RE JEWISH HAVE TO BE UP TO 33% OF THE TOTAL JOKES TOLD IN YOUR FILMS? It really is a simple question. Every three or four jokes there was something about being Jewish. In each and every film Mr. Sandler makes it becomes more and more prevalent and more and more irritating.

Also, I felt that the portrayal of Mexicans in this movie was over-the-top, racist, and unnecessary. I’m all for a good dose of healthy racism with a point like in the Harold & Kumar films, but the things that some of the Hispanic characters said in this film are just downright embarrassing.

Product placement is also something I noticed in this film a lot. The person I went to go see Jack and Jill with had a bet with me. We were supposed to count the amount of farts and the amount of times we saw product placement. In short, we lost count. You know you’re in a bad movie when there’s a scene that takes place in a cinema, only to see a bunch of Coca-Cola stickers popping out from all the concessions.

As for being the worst film of the year, that honor goes to Cars 2, which truly is a horrible, horrible film. Where does Jack and Jill fare, you ask? Pretty damn close. I really can’t recommend this movie to many people, unless you want to see Al Pacino act like a fool. There are a lot of great cameos that keep things relatively exciting, but when Johnny Depp isn’t popping up on screen, either Jack or Jill are, and you really don’t want to see that.

P.S. Why in the hell is this movie rated PG?