There probably isn’t much point in devoting an article to Fallout 4‘s announcement because let’s face it, you’re on the internet, so you’ve heard about it. Bethesda’s unveiling of the post-war RPG made the rest of E3’s news sound like that droning gibberish Charlie Brown hears whenever adults are talking – it drowned nearly everything else out. So rather than dissect the small bits and pieces of information we have on the upcoming iteration, I want to go back to Fallout 3 and talk about why a new chapter in the series is such a big deal, at least for me.

When I take a look back on  the gaming landscape in 2008, it really seems like a turning point for my perspective of my favorite hobby. If I were forced to pick a point in time where my perception of the medium shifted from pure entertainment to something more critically valuable, that year is a frontrunner, and not just because it was one of the most jam-packed years for video games. In that twelve month period in 2008, Grand Theft Auto took a sharp turn toward a more serious, scaled back narrative in GTA IV, Far Cry 2 fizzled yet struck a serious chord with its unique approach to emergent story, and I was getting my late introduction to the beautiful absurdity of Hideo Kojima’s Metal Gear Solid IV. And while each of those games have been wonderful, important notches on my progression toward a better appreciation of video game design, nothing has stuck with me a vividly as the vast amount of time I spent bashing my head against, and then somehow falling deeply in love with Fallout 3.

I think I must have started and given up on Bethesda’s big return to Fallout two or three separate times before I finally stuck with it and learned how to play. My initial reaction was that it was shallow, directionless and woefully bad at providing information to the player. After several hours of wandering seemingly barren fields and ghost towns I’d shut the game off in frustration. And some of that is still fair criticism. But what I fought against and failed to register is that Bethesda didn’t forget to tell the player where to go and what to do – that doesn’t happen in a AAA game – That sense of untethered freedom, of free-falling into the end of the world, is exactly the point. And once I pieced that together I realized that that’s what is so beautiful about Fallout 3: Half the time it feels like the game couldn’t give a dusty shit about you.

The best way to illustrate what I’m talking about is to look at how the game handles its quest system: There’s no radial mini-map, just a compass with non-descript blips that tell you if you’re walking toward a tracked quest, a friendly or an enemy. NPC quest-givers don’t have markers above their head either. Essentially, the world just…is. You can walk right past a side quest or a fairly major gameplay element and never realize it. You know Dogmeat, the stray dog that serves as the centrepiece of Fallout 4‘s announcement trailer? He’s one of the sequel’s NPC buddies who can tag along with you while you play in the upcoming sequel, and he’s actually directly based on a stray dog of the same name you can find and adopt in Fallout 3. The original Dogmeat is one of the most memorable and beloved parts of Fallout 3 and I didn’t know he existed until I learned about it online after my first completed playthrough, because he’s a random encounter you find by stumbling onto one particular landmark among hundreds across the map. This is also what makes Dogmeat such a special companion – he’s not something baked into the sequence of events (he can also permanently die in Fallout 3 which is terribly depressing). It’s a design that makes discovering something sometimes more rewarding than the actual rewards, which is something that just doesn’t happen in other games when every ‘discoverable’ thing in the world has its own icon on the world map. 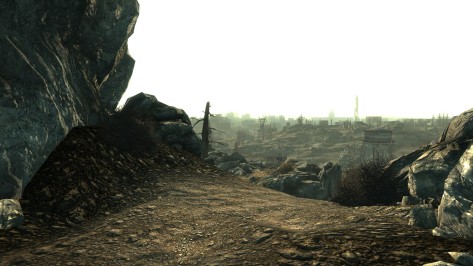 But Fallout 3’s idea of exploration isn’t only a novelty to make collectibles feel more satisfying. Bethesda actually makes wandering and exploration part of the game’s intrinsic structure, and it lends itself perfectly to the makeup of an open-world RPG. Unlike the standard story of a game like this, which involves enormous stakes and a multi-tiered mission to save an entire country, the overarching narrative in Fallout 3 is simply to find your father, who disappeared somewhere into the D.C. area. For the most part the major questline is just a matter of learning where he’s been, and going to that place. It’s that simple. The game doesn’t pad those objectives with arbitrary obstacles either. Most of the time your mission will look something like this: 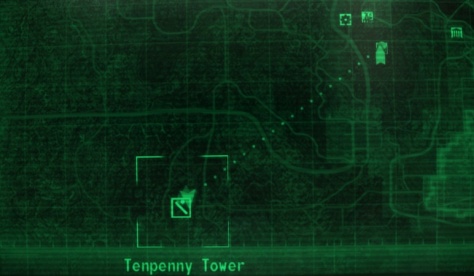 And hypothetically speaking you’d be able to go directly from point A to B with no artificial diversion coming up to send you after a magical MacGuffin or something of the sort. Instead, the only thing stopping your progress is the landscape between you and your destination. Raiders, irradiated lakes or enormous mutant bears are only some of the hiccups you might face along the way.

So rather than beeline directly for your goal, you’re much more likely to start scouring the area; There’s a grocery store down the opposite direction just a mile or two away. Maybe you’ll find some ammo or food in case you’re attacked on the way to your mission area. In the process of that, you might talk to an NPC to trade. It turns out they’re looking for help finding their little sister. In exchange for helping them they might give you a stronger weapon (or you can always just kill them, y’know, to be safe), so you agree to stop and look. While helping/looting the corpse of your new NPC friend you might discover their sister was eaten by cannibals in the building’s basement. While sorting though some audio journals of this community slowly descending into the barbarism that killed the young girl, you also discover some heavy armour to get you safely to your objective. All of a sudden you’ve completed a small story tucked away in the game world and completed a side quest without being guided by a flashing map marker or prodded by a progress bar. Necessity actually breeds exploration, and exploration provides the equipment required to navigate the more treacherous parts of the world and push the story forward. All of those traditional tropes of a modern open-world game – looting, exploration, minor side-quests – fit remarkably well into the way the game wants to be played.

In 2008 this wide open system was a difficult nut to crack for lil’ old me. Missions were supposed to be clearly labeled, with a digital trail of breadcrumbs on my map that I can follow without ever looking up at the world in front of me, until I reach the man with the flashing symbol over his head, so he can give me the next trail of breadcrumbs to find a flashing special item…Fallout 3 all of a sudden made it remarkably clear how little of a role I played in my roleplaying games.

It took me quite a while to come around to Fallout 3, but once I realized how masterfully Bethesda designed the world it became an immeasurably rewarding playground. And that’s without even acknowledging how they create real moments of humor, tension and horror with the environment they’ve created. The nuclear apocalypse in Fallout is surprisingly full of life, culture and complexity once you take the time to look for it. If Fallout 4 sticks to the same tenets, the end of the world can’t come soon enough.