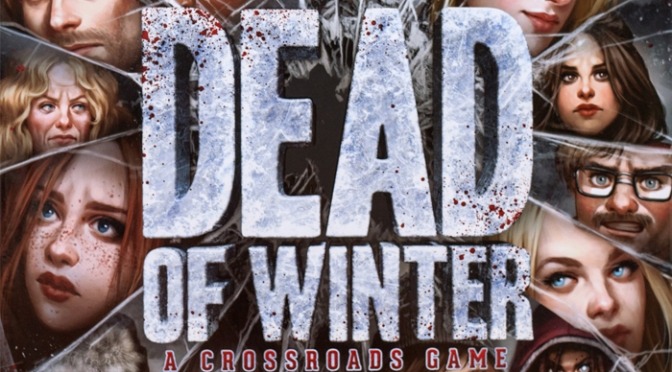 It is coming close to Halloween, the time when costumes, candy and scares are a plenty. But what does one do when the urge to dress up fades? What do you do when you are tired of the same old horror flicks on TV or your streaming channel of choice?

You still want a horrifically entertaining Halloween, but can you do that from the comfort of your own home? Of course you can! Through the magic of table top gaming you can enjoy all the Halloween thrills you desire. So get a few pals by your side and let your imagination run wild with this special edition of Table Top Bonanza.

Here is your guide to some of my favourite spooky based table top games. The market for more horror based games has increased hugely throughout the years, helped in no small part by the rich storytelling you can get when playing these games. The H.P. Lovecraft games are especially popular among players, opening up the mythos of Lovecraft’s Great Old Ones with very immersive gaming experiences. Here is a collection of some of my personal favourites to help keep you thrilled and chilled in the comfort of your own home. First off I am going to look at two of the most intense games I have ever played: Dead of Winter and Arkham Horror.

Dead of Winter could quite easily exist within the depressingly dark world of The Walking Dead, but excitingly is its own entity. It is a co-op game, where players all work together to try to survive. But each player has their own secret goals to accomplish to win the game. There is also the distinct possibility that one of you is a traitor. If you are, then play it cool because if the group finds out about it they can kick you out of the compound! The main structure of the game is set up into different rounds. These range from your own adventures collecting supplies and things you need to complete the game (as well as keeping your own character alive in this frozen, zombie infested world), the zombies movements and compound maintenance (keeping people fed, removing rubbish, putting up barricades). 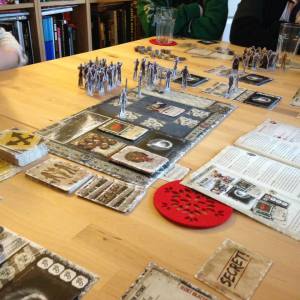 This game (like no other game I have played in a while) really grabs you and brings you kicking and screaming into this new and frightening world, and you will love every second of it. After a few rounds you are so invested in what happens to your characters that when hard decisions need to be made they can shatter the confidence of your fellow table top players and make you feel pretty rotten inside. If this tense atmosphere is not enough to entice you into this world, then how about a Felicia Day (The Guild, The Flog) special figure which you can get on-line if you are lucky! 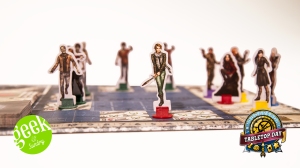 The thing I love about the game is that every action has a repercussion somewhere and suspicion can be easily aroused. The role playing style elements of this game help to drive the game play along. When you enter certain areas story cards can be read out, leaving you with decisions to make. Do you take on this new person you have found in the wilderness? Sure they have great skills, but they will put a drain on your resources which are already stretched thin. But can you leave them to die? These choices make this an incredible gaming experience. 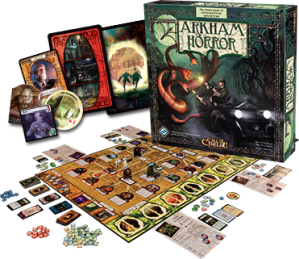 This H.P. Lovecraft game is part of a whole heap of games out at the moment celebrating the creator of the Cthulhu legend. This game as you would expect plays out in Arkham, and the board is used as a map where going to shops and streets leads to clues and encounters. You work through the game trying to stop the opening of gateways to other realms where creatures burst onto the street. You then enter these other realms and have to fight in their world and our own for survival. If you let too much chaos enter the streets of Arkham then one of the many Lovecraftian Outer Gods will awaken to take the streets for themselves and you along for the ride! This is a very brief description of an extremely multi layered and superbly structured game. 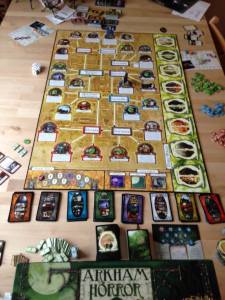 I have been itching to play an Arkham game for quite some time and what appealed to me about this one is that even though you are a solo player there is a co-operative element to it. When the gateways open you both need to work together to shut them down, otherwise the game would be over real quick. There are different ways to play as well. On my first game I played just to stop the creatures getting onto the streets of Arkham, with little success I am afraid. But because of the rich story development and character designs you can play it RPG style, moving your character around the board for clues to help complete the story arc. The surprise comes when you find out how screwed you actually are. If you do not keep an eye on the gateways opening and the monsters pouring out, you will quickly get to the stage when the God wakes and then you are pretty much in game over mode! You have to constantly plan ahead with your moves, deciding which character attributes to boost up (another great feature) and figuring out what is best for not just this move but the next. Much like Dead of Winter you can get quite into this and much like Winter a happy ending is not assured. 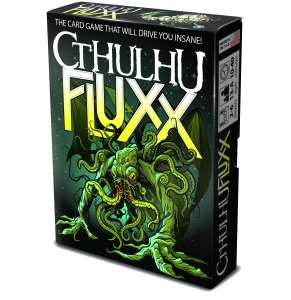 Sticking with Cthulhu based antics we look now at one of the many variations of the Flux game Cthulhu Flux. Flux is a game that can be easy to play or a real struggle depending on how your mind works. The idea is that the rules change constantly and you and the other players are in charge of the changing of said rules. Because the rules are in a constant state of flux it makes it difficult to explain how the game works, but here goes! Each player gets a set amount of cards to start and plays a card. The main cards to play are Goal cards which normally have Keepers on them that you need to play on the board to win, Keepers may have their own special skills with Action cards and New Rules cards changing the course of the game play. There are also Creeper cards which attach to a players Keeper card and prevent them from winning.

Though it sounds hard at first, after a few games the structure becomes quite liberating. You never know what you are going to get or what will happen. You may have enough cards to win, but then if someone changes the goal card you are right back to square one. But also if you don’t like the rules on the board, then try and change them.  This keeps the gameplay real fresh and adds an element of extreme frustration to gameplay, especially if a player changes the goal cards you were trying so hard to achieve! This Cthulhu designed set of Flux is one of the more entertaining editions out there.  It is pretty frikking awesome for a Lovecraft fan to slam down a Necronomicon card and use it to their advantage, not so good when someone steals it away! The fun of the game comes from the way the cards are dealt out by the player and the many options they bring to the game. 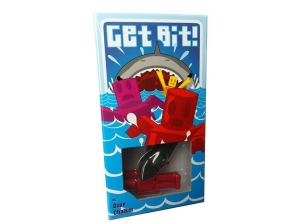 Shark biting antics ahoy with this great little game suitable for all ages. The premise is insanely simple, but hugely entertaining. You play as a swimmer swimming away from a shark. Forget that the figure looks like a robot and why would a robot be swimming, it’s not important! Each player gets their own figure and a set of numbered cards. All the figures are lined up one by one on a table. You pick which numbered card you want to play and your figure moves that amount of spaces. Players all put their cards down together, then turn them over to see where everyone is moving on the line, if you get the same number as another player you stay static, bobbing in the water while the shark swims ever presently behind, waiting to chow down on any stragglers! If the shark catches you, you lose a limb off your figure and go to the front of the line. This continues until you are just a head and torso, then you are out the game. The player who survives the shark attack is the winner. 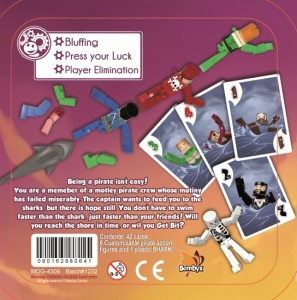 For a game with such horrific content (unless you like the thought of a shark slowly taking your limbs), it certainly is a heck of a lot of fun to play. The more players the better really, because the options open up more for what you can do. Though it is fun to slowly remove your poor characters limbs after they get caught by a shark, it is more fun deciding what move to play next. The cards do not refresh until they have all been used, so while you can play a high card and go straight to the front of the line, if you end up near the back later on and only have small numbered cards to save you, you are going to end up shark bait! When you tie with another player and stay stuck in your position you view the game in slow motion, seeing your poor little guy become limbless! Another great part of the game is the quickness of the rounds. It only lasts about 10 minutes and after playing 2-3 hour epics like Dead of Winter, this can really help to shake the tense cobwebs away and lighten up the mood.

That about wraps it up for this edition of Table Top Bonanza, which is for the best as you need time to go out and get the games I have just covered! The fun of table top gaming is finding games like this and sharing them with other likeminded people, so if anyone has their own favourite table top games then why not mention them in the comments section below?

If you still crave more table top excitement then why not check out other articles by Grizzly Bomb on the table top phenomenon here. If you fancy more Halloween based antics then check out the Countdown to Halloween to see more horror based articles, especially if you like Get Bit! as Grizzly Bomb has compiled a gallery of some of the best so bad they are good CGI Animal Rampage Movies!