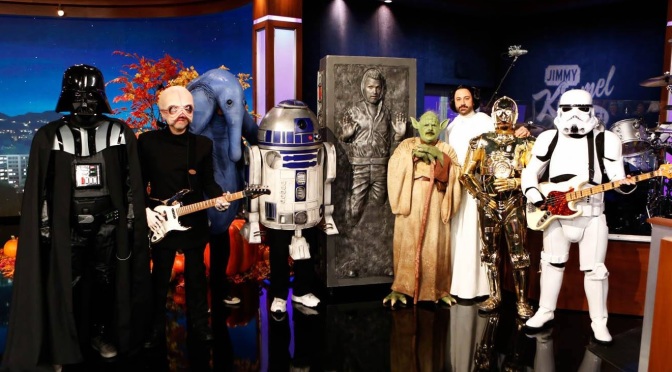 We’re just a little more than 3 weeks away from the long-awaited release of Star Wars The Force Awakens and in the last few weeks it seems that Disney is aiming to take over the known universe. Their next step to doing so is the Star Wars Special that is set to air tonight on Jimmy Kimmel. Take a look at the mini trailer the show put out to advertise tonight’s show.

As you can see the show will feature director J.J. Abrams, Harrison Ford and Carrie Fisher who are returning to the franchise along with newcomers John Boyega, Daisy Ridley and Adam Driver. Though J.J. will likely keep anything major from being given away, we should get some interesting comments from the aforementioned cast members slated to appear on the show. Carrie Fisher in particular is known to let things slip here and there, so it should be interesting. The special will air less than a month after Harrison Ford’s Halloween appearance on the show in which he was dressed as a hot dog while Kimmel was dressed as Princess Leia. If you haven’t seen it be sure to check it out, it’s good for a laugh or three.

One other thing fans should be on the lookout for tonight is perhaps yet another new TV spot. Though we’ve been inundated with new footage released in the form of the various TV spots that have already been released over the last 2 weeks, because Kimmel is on ABC, and ABC is owned by Disney, so it would seem to make sense they use the show to hammer home some more marketing for what is sure to already be a massive hit from a commercial standpoint. If you haven’t seen all of the new TV spots out there you can take a look at all the ads below. If you’re like me and are trying to avoid anymore new footage until the release of the movie…beware.

So Star Wars fans, will you be tuning into Jimmy Kimmel Live tonight to watch the Star Wars special? Do you want to see more Star Wars footage tonight or are you already satisfied and don’t want or need anything else until December 18? Leave a comment below and let us know which side of the fence you’re on.

For more Star Wars news be sure to check out the international trailer as well as the full domestic trailer. In case you need a pallet cleanser (something that isn’t Star Wars) take a look at 5 X-Men story lines we feel would make great movies.