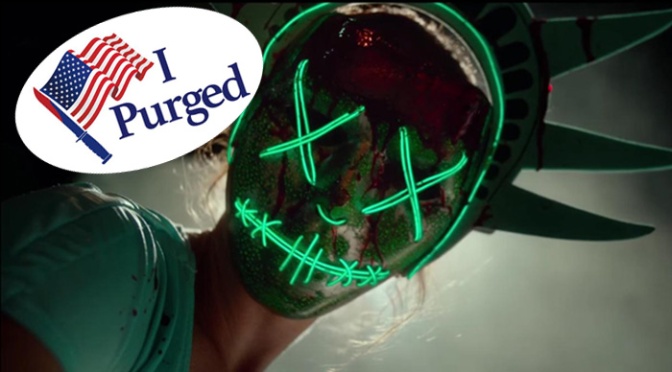 We’ve played a lot of Purge games this evening…

The success of 2013’s futuristic slasher flick The Purge seemed to promise a whole slew of sequels to come, not uncommon for the genre.

A year later we got The Purge: Anarchy. This time a little less horror, a little more action-thriller, we saw Purge Night from outside the relative safety of the home. No Lena Headey or Ethan Hawke, but rather characters who weren’t able to make it home before the siren, and for that, many of them didn’t survive the night. The second movie instead introduced us to Sergeant Barnes, played by Frank Grillo. You might recognize Grillo from the two most recent Captain America movies, or Kingdom – the stellar MMA show for which he is the lead. Well, Barnes recused some unfortunate souls and survives the night. Apparently playing hero worked for him, because now with the franchise’s third installment coming, he’s back and looking to protect Senator Charlene Roan in her run for President.

The good Senator is played by the extremely underrated Elizabeth Mitchell (Lost, Running Scared, Frequency). Roan is running with a promise to do away with the Purge night, which exploits the poor, as home security and weapons can get rather expensive. It was all masterfully demonstrated on Rick and Morty.

Anyhow, the third chapter of the franchise sees quite the collection of great television character actors in its ensemble. From Justified we see Raymond J. Barry who played Raylan’s dad Arlo. Also residing in Harlan County was Ellstin Limehouse played by Mykelti Williamson. Williamson appeared in season 8 of 24, but is probably best know as the man who inspired Forrest Gump to start shrimping – Bubba Blue. Kyle Secor (Homocide: Life on the Streets, Veronica Mars) featured prominently in the trailer, and finally, Star Trek; Voyager fans may recognize Ethan Phillips as the Talaxian Neelix.

Anyhow, the trailer – here it is.

Well, that looks pretty solid, mostly just more of the same, but the first two movies were worth watching, this one should be on par.

Is it time for the oppressed people to rise and say No More! Looks like it. The film is set to be released on July 1, 2016. Check back here at Grizzly Bomb for more Purge News!