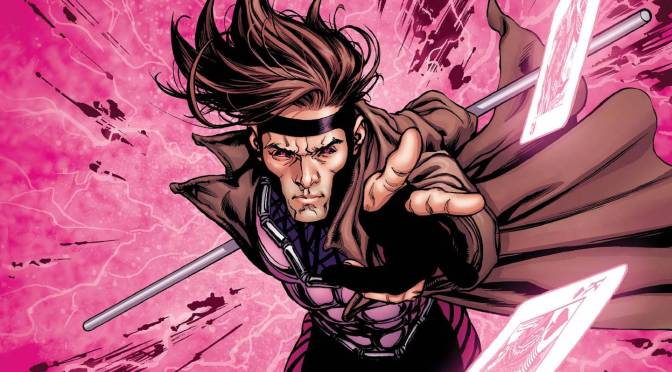 Gambit has had a rough start from the get go. From fumbling around with directors to unhappy actors prior to any sort of production, Fox’s would be golden-child was looking like it may be more of a dud than anything else. However, while we have a bit more of a wait now for the Channing Tatum vehicle than before, it seems to be a blessing for the production of this film.

Gambit was originally slated to be released in the fall of this year, but has now been officially taken off the 2016 roster and is, we assume, being put on the 2017 one. Thankfully, with the success of Deadpool, Fox was able to give Gambit a bit of breathing room as production hasn’t even started for the film.

END_OF_DOCUMENT_TOKEN_TO_BE_REPLACED

With the release of the latest Batman v Superman: Dawn of Justice trailer, we couldn’t have been more excited to see DC’s Trinity stand united on the big screen for the first time. And while this film will obviously focus more on Batman and Superman, we couldn’t help but wonder if we might see the comic relationship between Supes and WW explored in any future films.

END_OF_DOCUMENT_TOKEN_TO_BE_REPLACED

Seems like Gambit just can’t get a leg up these days, as we’re hearing yet another report of problems bringing the Cajun mutant to the big screen. Director Rupert Wyatt has exited the film, leaving the Channing Tatum vehicle without a director as the film ramps up towards production.

END_OF_DOCUMENT_TOKEN_TO_BE_REPLACED

Shortly after reports of Fox’s newly established cinematic universe, and a potential X-Men/Fantastic Four crossover, things seem to be quickly falling apart. It was announced that Fox has placed an embargo for all Fantastic Four reviews for a day prior to the films release. This does not bode well for Fox. Embargoes are rarely used for films and when they are, it’s usually an indication that the said film isn’t any good.

END_OF_DOCUMENT_TOKEN_TO_BE_REPLACED

Now we all know Marvel’s mutants get a rough deal. Dying, getting brought back to life, having their powers stripped away and almost causing the destruction of the Earth all seem to happen on a weekly basis for these guys. So it’s nice to see that Pete Holmes can inject some humor into the X-Men world with a series of shorts from his late night talk show, called Ex-Men.

The basic premise behind this is that Professor X is cleaning house and ridding the X-Men of the more useless or flawed members. The shorts amount to Xavier, played by Holmes, calling the various mutants into his office to sack them all. So sit back and enjoy Charles Xavier in a more twisted vein than we are used to seeing, shit-canning some of our favorite heroes with absolute joy:

The full playlist is available on Pete Holmes’s Youtube page and includes Storm, Nightcrawler, and Jubilee.

My personal favorites are the Wolverine one that plays Logan as a dumb jock and the Angel sketch where Xavier cannot stop wetting himself over how awful Warren Worthington really is.

If you liked these then maybe check out Pete’s fantastic Batman parodies, which started out as a collaboration between College Humor and Holmes’s sketch comedy group Front Page Films and more recently have been incorporated into The Pete Holmes Show. Here’s a taste:

Welcome to Comic Rack! My pick of the top five comic news stories in no particular order.

END_OF_DOCUMENT_TOKEN_TO_BE_REPLACED

Welcome back to the Hero Express, your one-stop sometimes SPOILER filled shop through the news filled world of superhero’s in Film, TV, Video Games and whatever else floats your boat.

END_OF_DOCUMENT_TOKEN_TO_BE_REPLACED

Heading to living rooms soon is the somewhat anticipated X-Men: Destiny. While I do look forward to this game, I won’t be lining up for it or anything. Don’t get me wrong, I love the premise and the gameplay looks adequate. But usually when I play an X-Men game I want to play as an X-Man(or Woman). I may be a little picky here, so let’s just say I will be picking it up when it comes out, but my expectations aren’t huge.

END_OF_DOCUMENT_TOKEN_TO_BE_REPLACED

This issue was a must, with everyone being left without any closure and wondering what the after effects of the Age of X would have on our favorite mutants. I also wondered what the heck happened to Legion at the end? Didn’t Xavier say they didn’t know where he was? How would they deal with him? Would anyone smack Dr. Nemesis in the face for dropping the ball on his treatment on Legion? I would say all of that was answered in this issue for the most part.