Gotham is doing a lot of things right.

The oft-criticized FOX show that looks at a Gotham before Batman has been making strides in recent weeks. The writing has picked up, the villains are better, and they are making Harvey Bullock into an actual person rather than just the walking personification of a bad cop. Bullock made real strides in Penguin’s Umbrella, the seventh episode of the first season. During said episode, in a scene that felt ripped right from High Noon, our hero is totally deserted by his brothers-in-blue and left to stave off assassination from Falcone’s number one hitter – Victor Zsasz.

The weight of all his fellow officers abandoning him in his time of need only hardened the resolve of the future commissioner. And that refusal to back down now has Captain Essen and Bullock coming around to Gordon’s side – even if it might take the rest of the force some time to do the same. That act, the whole station abandoning his partner seems to have put things in perspective for Bullock. We saw in Spirit of the Goat that Harvey was once a hopeful, strong-willed detective. Now it seems like Gordon is slowly restoring his faith. In the eighth episode – The Mask – we start to see some of the fallout between Gordon and the other cops, eventually forcing Bullock to lay into the squad room and inspiring Sarah Essen to start acting a bit more like her comic book counter part, venturing out of the precinct and actually aiding Gordon in the field.

Also in the episode, which is probably in contention with its predecessor for the best of the season so far, we were introduced to a few more characters who had familiar names. First, Richard Sionis, who we can assume is father to Roman – more commonly known as Black Mask, made his first appearance. Richard Sionis proves to be just as crazy as his son is in the books, if not more so. Richard, like half the characters on this show have attempted to do prior, tries to kill James Gordon. It doesn’t go well for him.

Something else that had been handled better the last few episodes is the involvement of Bruce Wayne. While recent episodes have shown his investigative skill, The Mask showed us some of the rage that resides within in the boy, and fuels him to eventually become the Dark Knight. In this instance, Bruce finally returns to school and finds himself bullied by other kids for being an orphan – because kids suck. The lead bully, weighing in at roughly double Bruce’s size – none other than Tommy Elliot. For those unfamiliar with the name, he popped up in comics just over a decade ago during the now famous ‘Hush’ storyline. The character was presented as Bruce’s best friend from before his parents were killed. Best friends here though – they are not. This is where it gets good, and also where you see a lot of people whining. When Alfred learns that Tommy has been picking on Bruce, he drives over there with the young Master Wayne, and condones the beating that Bruce hands out to Elliot boy. 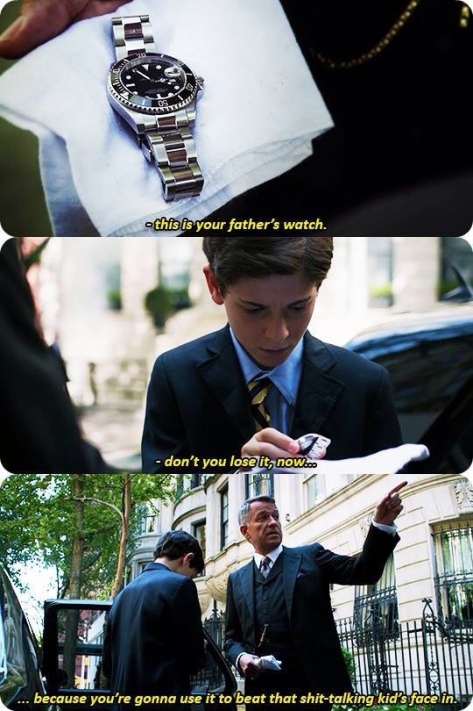 This act – an adult condoning kid on kid violence had some writers up in arms online this week. For me though – I love it. And here’s why:

Aside from those characters popping up, the war between Falcone and Moroni, which is being fought in the background by Fish and Cobblepot, continues to rage on. The writers still aren’t sure what to do with Nygma, shoehorning him into each episode. Though based on how he is treated by his colleagues, I wonder how much longer they will keep him at the GCPD.

And finally, Tommy Elliot and Richard Sionis aren’t the only new faces in Gotham. In the promo for episode nine, titled Harvey Dent, we’ll finally get to meet the bright-eyed, idealistic White Knight of Gotham City.

So after a jumbled pilot and a couple of so-so episodes, this show seems to have found a direction and a voice, and I can’t wait for Monday.