Come Halloween night, Ashley J. Williams is making his return. With him, come the dead. Or deadites to be more specific. Starz is bringing the cult hero to the small screen, once again portrayed by the one and only Bruce Campbell.  For those of you who can’t wait till then for your fix (like us), Starz has released a new trailer as well as some behind the scenes stuff.

Well, that trailer has no shortage of deadite killings or Michigan State gear! Later Granny.

Lots of chainsaw play and gore for such a short clip, count us already convinced of the shows pedigree. As we’ve talked about before, the series sees Campbell reprise his most famous role; Ashley J. Williams. A character that hasn’t been onscreen in over 20 years (save that quick cameo in the end credits of the 2013 reboot), but has stayed relevant through the comic book medium and in fan films.

We also have a behind the scenes video, complete with Sam Raimi!

Finally, since we last talked about the upcoming show, they have added some star power. Both Mimi Rogers and Lucy Lawless have joined the cast. Rogers, recently seen on Mad Men, will play “Suzy Maxwell, a woman who is reunited with her family and several uninvited guests after a freak accident”. 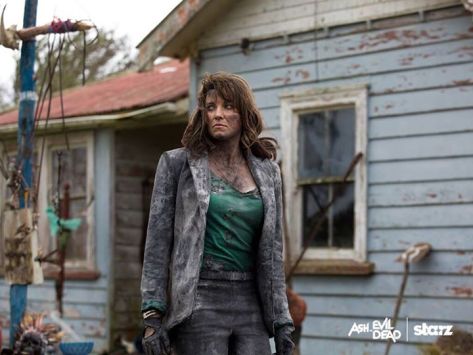 Lawless looks primed for a larger part, she’ll play “Ruby” – a woman with knowledge of the deadites, who teams up with disgraced Michigan State Trooper Amanda Fisher (Jill Marie Jones) in the hunt for Ash. Fisher blaming Ash for in the increasing body count that we know is caused by the deadites, whom have been dormant for the last 20 plus years.

Word is that while Army of Darkness may not be referenced directly, the events of that movie did in fact happen, and they’ve take a major toll on Ash’s mental health. Groovy.

So, come Halloween I know I’ll be tuning into Starz to see some gore filled chainsaw action – how about you? Let us know in the comments or on Grizzlybomb’s Facebook page. Or don’t, whatever.