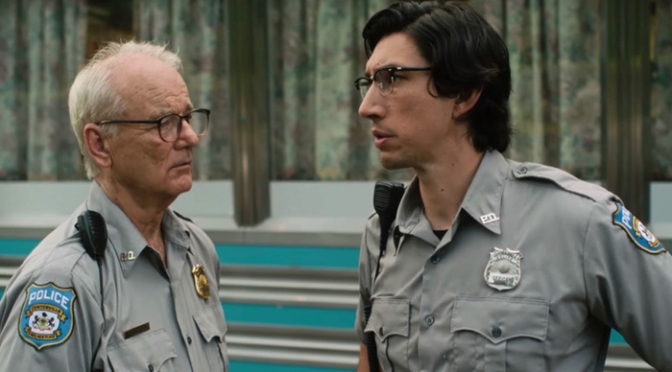 Focus Features has debuted the first official trailer and poster for the latest Jim Jarmusch film titled The Dead Don’t Die, a new zombie thriller from the acclaimed filmmaker. The film reunites Jarmusch with some of his biggest collaborators, including Adam Driver, Tilda Swinton, and Bill Murray.

END_OF_DOCUMENT_TOKEN_TO_BE_REPLACED

Party Down Movie Has Financial Backing and a Gung-Ho Cast

Party Down is one of my favorite shows ever and it’s agreed that it was most definitely cancelled prematurely. The brilliant writing, excellent cast, and consistently witty humor was no match for the usual garbage that makes its way to TV which is probably part of the reason why it was cancelled; not enough people “got it”. But that’s okay, because the ones who did are demanding more and it seems like now they’re finally going to get it.

END_OF_DOCUMENT_TOKEN_TO_BE_REPLACED

I don’t mean to come off as misogynist or anything like that, but even if Harmony Korine’s new film Spring Breakers sucks royally (which it won’t), no one will dare hate the scantily clad former Disney chicks who carry the film. In these new, steamy pictures from the upcoming film, we get a look at what our heroines will hopefully be wearing for the duration of the film (AKA as little as possible).

My wife, Selena Gomez, stars in the film alongside Vanessa Hudgens. James Franco stars in the film as well, playing a drug dealer. I’m actually really interested in the content of this movie, but tossing in some scantily clad ladies won’t hurt either.

According to IMDb, the film follows:

“Brit, Candy, Cotty, and Faith have been best friends since grade school. They live together in a boring college dorm and are hungry for adventure. All they have to do is save enough money for spring break to get their shot at having some real fun. A serendipitous encounter with rapper “Alien” promises to provide the girls with all the thrill and excitement they could hope for. With the encouragement of their new friend, it soon becomes unclear how far the girls are willing to go to experience a spring break they will never forget.”

Pretty much sounds like the Harmony Korine we all know and love.

Check out the pictures below!

[EDITORS NOTE: Unlike my (obviously) young colleague, this movie does almost nothing for me. I don’t know these ‘Disney Chicks’, they all look like little kids to me. And as much as I love James Franco, this is not a movie that I would’ve even considered watching until about a minute ago, when I saw who else was in it. Heather Morris, who next to all the little girls in this movie, is a woman. Booyah.]

END_OF_DOCUMENT_TOKEN_TO_BE_REPLACED

In one of the oddest trailers I’ve ever seen, Val Kilmer stars in one of three shorts that make up The Fourth Dimension. His short, entitled Lotus Community Workshop, focuses on Hector, played by Kilmer himself. Hector is a motivational speaker who is quite awful at his job. Besides that, there’s not much else we can discern from this art-comedy directed by the one and only Harmony Korine. You probably know the work of Harmony Korine through such family-friendly fare as Kids, Gummo, Mister Lonely, and who could forget, Trash Humpers.

It may seem like I’m mocking Korine’s work, but quite the contrary. I’m a huge fan of the guy and I think he has a really interesting way of depicting inner peace through outer chaos. I’m excited to see what he does with Kilmer’s character, but I’m even more pumped for his 2013 film Spring Breakers. Starring my wife, Selena Gomez, there’s not much known right now about the film except for the fact that it’s about four college girls who end up in jail trying to rob a restaurant to fund spring break. But knowing Korine’s style of filmmaking, it’s gonna get messy.

Now, let me reiterate that Lotus Community Workshop is just one of three films that makes up The Fourth Dimension. The other two films are directed by Aleksei Fedorchenko and Jan Kwiecinski. To be perfectly honest I have no idea what the other two films about or what they’re called. I’m just waiting to see all the interesting moments in the trailer come together in three parts. The film premiered at the San Francisco International Film Festival on April 20th, and at the Tribeca Film Festival on April 24th.

RECAP: In this episode, there is a website “Eaves Dropper” that all of the kids are following. It shows all of its viewers all of the gossip about the students at the elementary school.

One of the students, Pete, “shit his pants in front of everyone”, and Cartman is spreading the rumor, assisted by the Eaves Dropper website. The staff believes that Pete might kill himself, because of the situation that happened to another student a year ago. They offer him a deal. If Pete doesn’t kill himself, they will make it worth his while.He puts laxatives in cupcakes and offers one to a little girl. She eats it, craps her pants, and then tries to kill herself by jumping off the roof.They then come up with a new plan. A pizza party will feature laxative-filled Pizza Hut…. with Arby’s Horsey sauce.