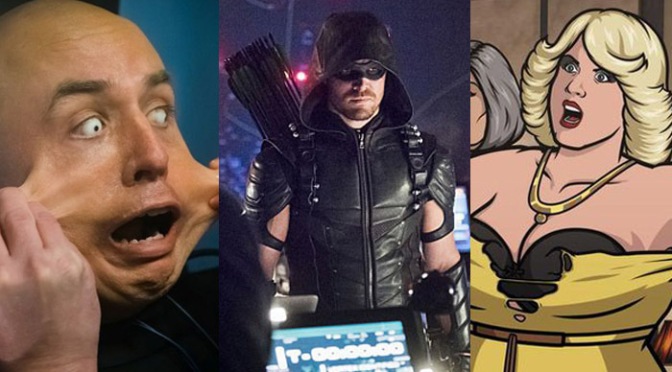 Today we’re gonna talk about a few of the major events from this past week on some of our favorite shows. This post will contain spoilers from the week of May 11-16 for the following shows; Game of Thrones, Arrow, Archer, and Gotham.

Well, let’s start with my emotional crutch for the week – Jon and Sansa reuniting! I felt all the feels with that one. We’re not going to get into too much detail here, cause I already did that yesterday, but I just wanted to make sure we acknowledged it.

Promo for Next Week’s Game of Thrones; Click Here

Gotham has introduced a lot of characters already that will one day make up Batman’s rogues gallery. This week, we saw one of the most popular villains from Batman: The Animated Series join Hugo Strange’s band of psychos – a man simply called Basil. Comic fans will recognize that to be Basil Karlo, the original Clayface.  It’s no surprise that the character showed up, he is one of Bats’ better-known villains, but when the casting was first announced, we weren’t sure if he’d have his powers or not.

Another notable appearance this week was that of the Court of Owls, at least an introduction anyway. The Owls, we now know are funding Hugo and his experiments at Arkham, and they will no doubt mean bad news for Gordon.

Finally, Fish Mooney is back from the dead, and with some superpowers to boot – but no one really cares. Finale is next week.

Gotham Promo for Next Week;

So this season of Archer has been stellar as a whole, but the last 3 episodes in particular. We talked about the clown/hostage stuff already, but this newest one was especially on point. The episode centers on the genders at the Figgis Agency splitting up, and both trying to do the same job behind each other’s backs – which quickly turns into Archer, Ray, Malory, and Lana all placing bets on who can seduce the target first – Be it Pam, Carol/Cheryl, Cyril, or Krieger. The highlight of the week (just edging out the constant shouting of “I wanna double the bet!”) was Dr. Krieger. Once he puts on a jump suit, he quickly becomes even more hilarious than usual, and in particular once the big fight starts and it looks as though he’s about to help Sterling;

That guy kills me.

Archer Promo for Next Week;

When I say Arrow, I mean the show, not Oliver in particular, but given all the comparisons he draws to Batman, I gotta think Bruce would not have let this happen. Just saying. Anyway, last week on Arrow, Damien Darhk launched a bunch of nukes from all over the world, and Felicity and her Dad (DC supervillain the Calculator) teamed up to stop ALMOST all of them. The stray, she was able to knock slightly off course – but it still exploded. On U.S. soil. This can’t have a positive outcome.

Arrow Promo for Next Week;
(Oh, look at that – Thea is a liability again! Color me shocked.)